I don't understand German, but there's something awkwardly efficient about the pageantry of these Frankfurt teenagers as they enter their gala in perfect rows, hand in hand. I remember my high school prom in Connecticut (ten years this Friday!). I had the flu and no date. At least I didn't get arrested for trying to smuggle booze and cigarettes into the Glastonbury Hills Country Club. Nothing like seeing your roughneck peers in rented wool tuxedos spread-eagled over a Crown Vic. 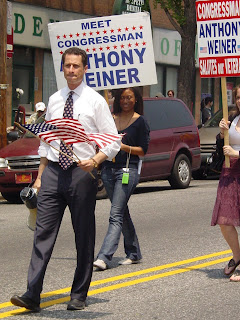 But enough about prom. Awkwardly efficient is a good way to describe Congressman Anthony Weiner, who announced via New York Times Op-Ed column that he would not be running for Mayor this year. A number of papers and sources anticipated this, from David Chen's article nearly a year ago about the Congressman to Ed Isaac Dovere's reflective piece printed around the same time last summer.
Speculating what the Congressman would or wouldn't do became a minor league sport in community newspapers this spring. At a reporter's roundtable in Sheepshead Bay last month, Weiner suggested that he was concentrating on a heavy legislative agenda in Washington and would decide whether to run for mayor by the end of May. The Courier's Steve Witt pressed him 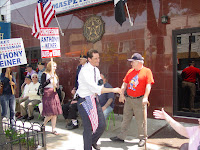 about whether Mayor Michael Bloomberg's $80 million would factor into his decision, and he said no. More likely, a difficult primary against City Comptroller Bill Thompson played a larger role. The press reaction to Weiner's decision is telling, because it indicates he would be taken seriously as a viable candidate. With Weiner in, the mayoral race becomes significantly more interesting to cover. We like competition. So does the public.
Ten years ago, I was nominated for Prom King. I lost, and the position had no real responsibilities, and the guy who won is know working at a Best Buy somewhere on the outskirts of Manchester, Connecticut, but that's not the point. I may never understand why candidates wait for a more convenient time to run for a higher office instead of seizing the moment. Who knows what will happen four years from now. Prom only happens once every four years. I admit it. I've been crashing high school proms. I'm not proud of it.

Congressman Anthony Weiner, top row, center, and below, right, will not run for mayor so he can spend more time with his family.