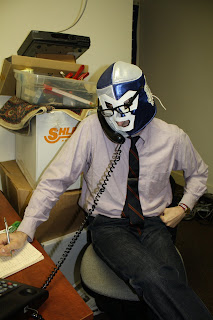 So you say there's another flu outbreak in the neighborhood? I'm on my way!

Time for The Short List, a look at the week that was and what lies ahead, sponsored by SPAM, Berkshire Pork, the Department of Environmental Conservation, and the emergency rooms of Woodhull and Wyckoff Hospitals.

Mayor Michael Bloomberg announced his May Day! budget sounding slightly more nasally than usual. May Day is right. We're done for. Sales tax going up 9% and a plastic bag user fee are the big highlights. While the green buildings program the Mayor and Speaker Christine Quinn unveiled last week will help save energy in the long term, it appears city residents will have to tighten our belts yet again. Perhaps there was some way of harnessing the energy of the sun...

Back in the neighborhood, there was the Department of Transportation's announcement and then non-announcement about the Kent Avenue bike lanes. Fortunately Greenpoint G 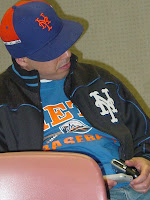 azette's Juliet Linderman and Brooklyn Paper's Ben Muessig have got it covered and 11211 has a little history. Good luck at the Pittsburgh Marathon this weekend Ben! I'm predicting a 3:20:16. Whatever that means. At least Oliver Perez, right, is taking an interest in the issue. We spotted him at a Transportation/ Waterfronts meeting on Thursday. 9.31 ERA? Nice. 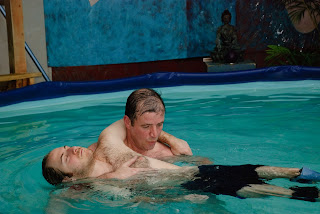 We don't really know why the Williamsburg Courier's Greg Hanlon is getting a topless massage from a middle aged guy in a pool. The corresponding story isn't online yet, but we have a photo, We think it's part of the latest Jamie Foxx video. Or maybe he's working on a Cutting Crew remix. Anyone care to speculate? 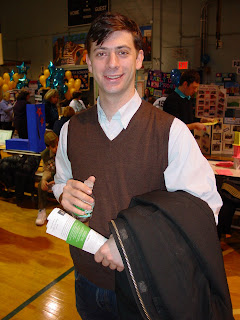 Back to the swine flu pandemic for a moment. I am not liking this story at all. A Catholic school down the street from me closed yesterday because a child developed symptoms and late 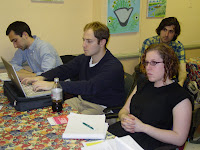 r that evening the L train shut down briefly because a rider became ill. This place is infested with pigs. I thought every one of my contracts has a standard no pigs clause. This is basically going to end with Press Row gathering all the light ammunition we can carry and heading down to Teddy's to fend off a maurading band of Swine Flu zombies. Hey Press Row, who's with me? Anyone? Hello?... great.
Posted by Aaron Short at 3:22 PM