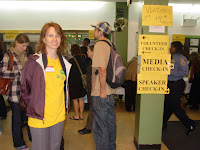 Short Takes - The Foodie Pulse Beats in Brooklyn May 07, 2009 by Aaron Short

On a beautiful Spring Saturday in Brooklyn, one had the choice of walking under elegant pink rows of cherry blossoms in the Brooklyn Botanic Gardens, fishing through vintage vendors at Artists and Fleas’ outdoor market, and dancing among artwork at the Brooklyn Museum’s Target First Saturdays.
Instead, hundreds of Brooklyn residents flocked to John Jay High School for the Brooklyn Food 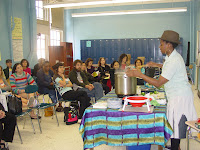 Conference, an all-day event held indoors, with workshops ranging from the dangers of food transnationals to how to grow your own victory garden.
The conference, sponsored by the Park Slope Food Co-op, has come at a seminal moment in the history of the sustainable food movement. Organic has given way to local, as an increasing number of Brooklyn residents are educating themselves about where their food comes from and the consequences of the choices they make regarding what they buy.
Inside, participants buzzed from class to class with a festive and energetic mood, despite the anxiety many residents feel from a recession that has little signs of ebbing and a rapidly rising unemployment rate. What struck me was not just the breadth of workshop topics but also the diversity in age, ethnicity, and people’s neighborhoods present at the festival. I saw environmental activists, theater directors, legal rights advocates, and city council candidates in the audience, along with farmers working in the South Bronx, immigrants living in Flatbush, and cooks from scores of restaurants throughout the city. 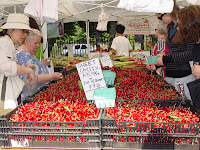 Localism, with its farmers markets, community supported agriculture, food co-ops, and do-it-yourself food products has moved well into the mainstream in Brooklyn to the point where the Pathmarks and Associateds of the neighborhood begin to look like an odd outlier, or at least severely misplaced.
A public that is becoming increasingly more educated about the food distribution process will make choices that have significant effects on the local economy. This has some local grocery owners and specialty food shops worried. In Greenpoint and Williamsburg, Manhattan, Nassau, and Metropolitan Avenues have dozens of stores that have been butchering meats, making bread, and grinding coffee for decades, not to mention the independently owned grocery stores that have been operating for generations. In order to survive, small, independently owned grocery stores must think more carefully about where they get their produce to serve a public that is starting to question where food comes from.
For Brooklyn Food Conference founder and general coordinator Nancy Romer, a Br 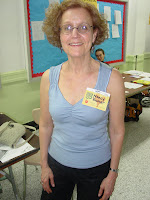 ooklyn College professor and a longtime community organizer, this is a positive development. She believes the increased interest in sustainable food coupled with the recession could drive traffic towards local specialty stores and ethnic grocery shops as people search for authenticity and tradition.
“I think there has been a real influx of new food and an appreciation of old food,” said Romer. “It’s like Michael Pollan says, ‘Eat like your grandparents and you’ll be in much better shape.’ Just don’t consume the quantity of meat and dairy and eat at McDonalds every day.”
John Tapper, owner of Greenpoint’s beloved grocery store, The Garden, is more skeptical. He has been providing organic and local produce for several years, and said that there has been no drop in the number of customers shopping at his store nor have they been spending less money when they shop there. Yet he sees many people carrying Trader Joes and Whole Foods bags in Greenpoint too.
“For any store like our store, you depend on distributors,” said Tapper. “We try to deal with distributors who deal with New York State farmers. Those who have always bought in Costco and BJs will always shop there. Those who like a little better quality will shop from day to day.”
In some ways, the conference has made evident what thousands of people throughout Brooklyn have already been doing, and that is making the conscious choice to buy local ingredients and cook at home. Searching for fresh ingredients takes time, visiting a greenmarket, The Garden, or stopping by Italian butcher shops and Polish bakeries before preparing a meal. Armed with the knowledge they accumulate at places like the Brooklyn Food Conference, Brooklynites are more and more willing to take the time to shop locally and pepper food suppliers about where their food comes from. In Brooklyn, food is sustaining, educational, and entertaining… until the next meal.