I need to make a correction first. Ward Dennis came up with his Kent Avenue plan on his own blog months before the DOT released their draft this April. Thies, a candidate for City Council and an active member of the Community Board, signed a letter Councilman Yassky sent out on the bike lanes in December 2008, and later backtracking. Today he supports Dennis' proposal. Though both men are Community Board members, they did not do their advocacy as board members. Much of the confusion regarding the Bike Lanes this past December came about because it was unclear who was speaking on behalf of the Community Board.

Short Takes - The Bike Lane and the Greenway

Is the Bike Lane fiasco a bad sign for the Greenway?

Let’s get this out of the way up front. The Department of Transportation’s roll out of its Kent Avenue Bike Lane plan last Fall was handled poorly. Very poorly.
When the DOT unveiled its plan at a Transportation Town Hall hosted by Councilmembers 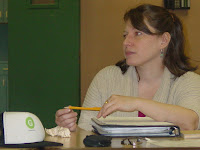 David Yassky and Diana Reyna in Williamsburg last November, residents and local business owners chastised city officials over parking regulations and signage. Cycling advocates had other complaints, recommending a stronger barrier between bike lanes and vehicular traffic. In the following weeks, confusion spread over the bike lane plan within Community Board, and the issue became so contentious that Transportation Committee Chair Teresa Toro was briefly deposed over corresponding with a local reporter about the board’s position.
It wasn’t the first time that the Department lost control of a meeting in this neighborhood, but the experience proved sobering and agency officials moved more cautiously on this issue.

Read more at http://www.greenpointnews.com/news/short-takes-the-bike-lane-and-the-greenway
Posted by Aaron Short at 1:17 PM