It's over. Thank God.

Frankly, candidates, we're not that impressed with your performances tonight."

I'm not going to lie. It was a challenging night in from the moderator's desk yesterday, keeping both the audience of Greenpoint and Williamsburg residents and the 33rd District City Council candidates (and the moderators) interested in what was being said in the debate. Think I'm kidding? The following exchange last night actually happened:

*Before the debate, when offered a plastic water bottle, Ken Baer said "No thanks, I've got my own," and then pulled out a ceramic mug, that was wrapped in plastic. We pointed this out to him. "Whatever." said Baer.

*Khristina Narishnaya, one of the staff reporters at the Gazette fighting off some pregame jitters, whispered just before debate began, "If I start to have a panic attack and run away backstage, do you think anyone will notice?" 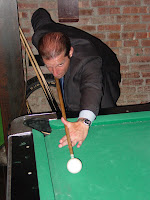 *Ken Diamondstone began to give a longer answer for a yes or no question before Gazette Publisher Jeff Mann cut him off. "But the other candidates got to give longer answers," said Diamondstone. "If the other candidates jumped off the Williamsburg Bridge, would you do it too?" replied Mann.
*Evan Thies pausing "I am the man... to bring what this community needs." Jeff later admitted it was a missed opportunity to sa 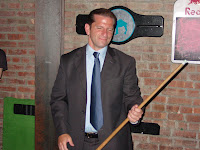 *Local activist Mike Hofmann wearing a GWAPP t-shirt for some inexplicable reason. The only place that GWAPP exists these days is in a TransGas legal brief and on Hofmann's chest.
*Doug Biviano avoiding controversy: "I can think of nothing more exciting than the sound of kids playing in a pool."

*Baer again. After dropping a microphone on the desk, Isaac Abraham leaned over and whispered to Ken, "You should file a lawsuit," to which Ken said, "No, I want this paper's endorsement."

*Evan Thies' parting shot at Assemblyman Vito Lopez and the Broadway Triangle: "This is the worst sham of a process that I have seen during my years working for City Council. The process has been contaminated possibly to the point of corruption. There may even be a need for an investigation at some point."

Steve Levin had an overall tempered performance and a cool answer to the Broadway Triangle question, while Jo Anne Simon had an eve 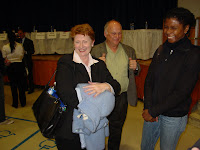 n performance and came across extremely likable. Thies and Diamondstone seemed a little flat, but maybe that was me. One of my college friends, who trekked out to the event even though he lives in Astoria and currently works as a rock and roll musician, said he liked "the woman" the best. His band is called Liam and Me and their video has been on MTVU all week. Check it, yo:

Liam and Me - Say It Out Loud (HD) from Davis Artist Management on Vimeo.

At least the afterparty at Matchless was slamming. I mean it. Hard to beat watching a pool death match with Evan Thies 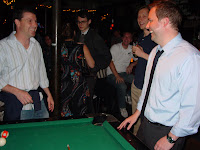 and WG News+Arts' Reid Pillifant on one team and Steve Levin and Thies Body man Nick Rizzo on another team. Evan and Reid won, thanks to Reid's crazy-good pool sharking abilities. D 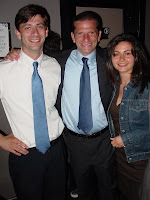 id we mention he has a twelve gauge and a twenty gauge shotgun back in Austin? As soon as he ships them from Texas we're goin' huntin' upstate. Also, Doug "The Biv" Biviano agreed to let me borrow his children for my ten year high school reunion back in Connecticut. Practically everybody in my class is married and has kids at this point and I need to show them up.


Finally, everybody stop and recognize for a second. Gotta give some love over to Linderman for putting this thing together. How many reporters her age have floor managed a City Council debate? Answer: None. That said, we're never ever doing this again. Ever... Unless the 34th District candidates call. 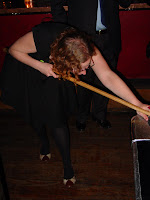 After the debate, Linderman is all business
Posted by Aaron Short at 12:26 PM

Considering that GWAPP operates completely on volunteerism and community will, I think they do a great job. There is no paid staff person at GWAPP.

GWAPP board members and member organization reps can be found at Newtown Creek Alliance meetings, seeding local Parks groups such as Friends of Bushwick Inlet Park, Transmitter Park group, working with NAG on the Open Space Community Committee, at OSA meetings, at Parks Dept meetings and so on. They can be found at OUTRAGE meetings, Kosciusko Bridge Stakeholders Advisory Committee meetings and much more.
So Aaron, even though I love your work, you got this one wrong. I think you owe GWAPP an apology.

I think NAG and some other groups might be planning another debate. You can never have too many, especially with the issues in North Brooklyn.

Sorry, I didn't meet to diminish GWAPP's previous work, but I am hearing that the organization will dissolve permanently in the coming months. Is this correct?

Aaron,
as Laura points out, GWAPP is an all-volunteer umbrella group representing the community interests in parks and open space issues for over 40 local organizations. With ongoing involvement in the EBP remediation process, the Where's My Park Day action with NAG, the Tree Group, a City Council Candidate Forum and the Steering Committee of the OSA Community Committee, GWAPP is actually more active than ever.
Dewey Thompson, Co-Chair GWAPP