Downtown! Things will be great when you're... Downtown! Don't wait a minute for... Downtown! Everything's waiting for you... At Community Board Two!

I couldn't wait another minute to attend this month's Community Board Two meeting, covering Downtown Brooklyn, Brooklyn Heights, Fort Greene, Clinton Hill, Vinegar Hill, and the Navy Yard. But what was waiting for me?... Announcements about parks construction, new automated postal machines, and a Brooklyn Public Library system that's so broke they're going to make you shelve your own books. Everything's waiting for you in another Community Board Running Diary... 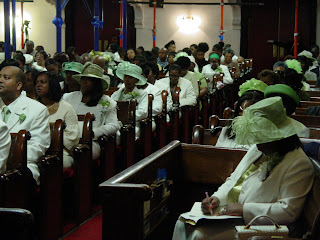 6:15 PM: The meeting, held at Brown Memorial Baptist Church (484 Washington Street) is scheduled for 6 PM but we haven't started yet. I've been to this church several times before, and they have one of the best Watch Night services in Brooklyn. Ain't no party like a holy ghost party! This is how we do it!

6:21 PM: I recognize Ellen Whelan-Wuest, Dan Squadron's constituent liaison, sitting off to the

side and go chat her up. They're still figuring out this whole power thing now that they're in the majority. Ellen says they finally found a district office in Manhattan but are still looking for a branch in Brooklyn somewhere near Court and Atlantic. I suggest she drag a desk on the G train to cut down on overhead. Plus, they'd get immediate feedback from the public!
"There's a lack of phone service and I don't imagine there's a lot of internet service down there. It's only $2 a day. I'll look into it," says Ellen.

6:25 CB2 Chairman John "Mountain" Dew leads us off. We’ve got a post office

presentation from Michael Fleming, not to be confused with Sean Michael Fleming, who is not here. He’s talking about new services offered at the Adelphi Station branch. This includes some new automated postal center machines, which are open for 24 hours at Cadman Plaza. We hear the post office wants to increase the price of stamps to 44 cents. As Jimmy Fallon says, if only there were a paperless way to send correspondence.

6:32 PM: The Times’ Andy Newman walks in, and disappears into the crowd. Looks like Walter Mosley is in the house. So is Assemblyman Hakeem Jeffries. I saw Hakeem at a Sunday service in this Church once. Pretty awesome service. One time in Fort Greene, I almost accidentally ran over Hakeem with a car. Geoffrey Davis was driving. Long story. 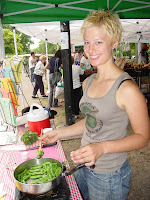 or all Brooklyn Markets reminds residents that the Brooklyn Borough Hall market is open Tuesday, Thursday, and Saturday. Douglas runs some amazing farmers markets in Brooklyn for those scared off by the crowds in Union Square and Grand Army Plaza. Asparagus, ramps, spinach, raspberries, and rhubarb are all in season this week!

6:58 PM District Manager Robert Perris, who looks an awful lot like notable author and pop culture critic Chuck Klosterman, talks about several construction projects including a traffic calming project in downtown Brooklyn and the replacement of a triple cantilever in Brooklyn Heights. I have no idea what that is. Either it's a gymnastics routine or a sex act. Hopefully Community Board Two nails the dismount.

7:27 PM: We're into Public Session! I spend much of the past half hour surfing for videos on trains crossing through small towns in rural Virginia, but this is pretty important. Uldis Skrodelis from the Brooklyn Public Library announces some dire financial news. The Library system, the fifth largest in the country, is facing a budget cut of $17.5 million cut (about 21 percent). Most branches will be open five days a week, for 25 hours, mostly in the afternoon, and staffing will be reduced by 175 positions, unless additional funding is secured. They are asking people to call 311, write letters to representatives, etc.

Lincoln Restler, a member of the Brooklyn Public Library Vanguard, a group designed to encourage 20 and 30-somethings to support the library, announces that the organization will be throwing several fundraisers in the future, including one tonight at Franklin Park Bar and Beer Garden.
“Any event that’s designed for 20 or 30-somethings means I can’t go," says John "Mountain" Dew.

8:04 PM: The last speaker of the night, Nannearl Blackshear of Borough President Marty Markowitz's office, announced that they are still in the process of appointing and reappointing Community Board members but they are very close to finishing this up. I think Dave Chappelle speaks for all of us on this one.


Be sure to check out Brooklyn Heights Blog for more info.