From the office of David Yassky...

"I am honored to 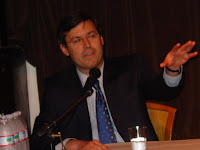 have the support of the Brooklyn and Manhattan Democratic organizations," said Council Member Yassky. "While dynamic and progressive leaders continue to join our campaign, I remain focused on fighting to deliver results and an accountable City government for taxpayers. I look forward to working with these organizations throughout this campaign and as Comptroller to create jobs and rebuild our economy for all those New Yorkers who have been forgotten and left behind."

"As Comptroller, David Yassky will hold government accountable, help rebuild the City's economy, and protect and expand the City's affordable housing stock," said Assemblyman Vito Lopez, Chair of the Brooklyn Democratic Party. "New Yorkers deserve a Comptroller that will fight for taxpayers to ensure their dollars are being spent wisely. David's record and vision for the Office prove that he will be that Comptroller."

What does this mean for the 33rd City Council race, upcoming petitioning, the Broadway Triangle plan, the Greenpoint-Williamsburg rezoning, and a whole bunch of policy initiatives affecting the neighborhood? What's David's move now? Will he endorse Steve Levin now? Evan Thies? Somebody else? No one?

According to Yassky spokesperson Danny Kanner:
"These are great candidates running for the seat and the voters for the 33rd will make the right decision."
Posted by Aaron Short at 1:15 PM

"You scratch my back, then I scratch yours."

Does this mean Yassky is finally free to endorse Thies?