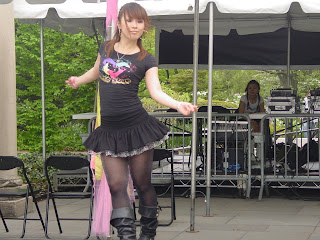 I felt a little creepy taking this photo, but not as creepy as the row of middle aged guys watching the Cherry Blossom performance in front of me.
I'm still a bit bleary eyed from an 8-hour Tribeca marathon on Sunday. Not sure which was more annoying: trying to watch a subtitled movie behind a 5-inch afro or listening to the cinephiles next to me talking about paying their way through Sundance... as an audience member, not a filmmaker. Botero (that one's for Miguel only). 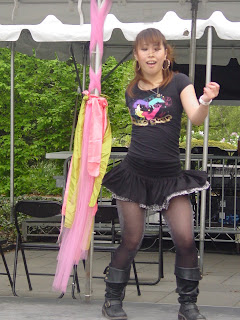 The Cherry Blossom festival was wonderful. Thank you Kate Blumm at the Brooklyn Botanic Gardens for the media tour. It's Botanic not Botanical. Blumm, as in, rhymes with Plum not Plume. I think. It's too perfect otherwise.

Greenpointers, you are woefully underrepresented in the Greenest Block of Brooklyn competition the BBG is hosting soon, so start sprucing up your block. On my block in Bushwick, I've already pushed all the dead pigeons that have run over by a sanitation truck into a nearby sewage drain. What are you going to do? 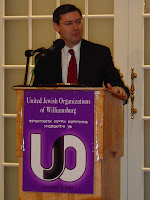 Last night, I went to a DL21C Monday Night Candidates Forum Smackdown. I will have more on the snoozer that is the citywide Comptroller race with a new edition of Where in the World is Councilman David Yassky, right, tomorrow. The photo is from the last time any one has seen David in the district. When the Hell was this?

Finally, in an earlier post, I did not provide any context to a bizarre photo of my former colleague getting himself a man-massage in a pool somewhere in Italian Williamsburg. Apparently, the story is that Greg went on assignment to try out a watsu water massage somewhere on the corner of Ainslie and Union. It was definitely not a mikvah. Or men's synchronized swimming. Thank you Newscorp for having the balls to print those photos. Let's run another one.