May 28, 2009 by Aaron Short A grassy lot on the banks of the Gowanus Canal. A Chinese restaurant and mini-mall. A church basement on a quiet side street in Williamsburg. A former bank on a busy stretch of Manhattan Avenue.
These are not the spaces one would think of as the site of a music venue but they are exactly what Jenny Gottstein, Marketing Coordinator of Mean Red Productions, is looking for.
“It’s getting harder to do things everywhere,” said Gottstein. “It’s hard to be an independent producer because you are getting squeezed on both ends. People have less money when they go out to pay for covers and are buying two drinks instead of five. And sponsors and partners are getting their budgets cut so they have less money to spend on marketing.” 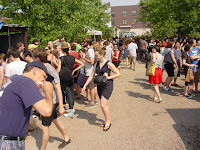 Gottstein and other MeanRed producers think of themselves as music curators more than event planners or marketers. As traditional music venues in Manhattan are becoming expensive and scarce, promoters have been looking for alternative spaces around the city to hold special events. DJs, musicians or promoters relay their artistic parameters to Gottstein who then sets about the city, scouting for a space that closely matches their specifications. This year, she has visited the back rooms of dim sum restaurants in Chinatown, pool halls, Quinceanera parlors in the Lower East Side, Italian Social Clubs in the Gowanus.
“The space has to be visually dynamic and have an interesting usage,” said Gottstein. “The dealbreaker for us is would they actually let us use their space. Some say, you’re kidding, right? But others say, yeah! It’s never ended badly. If you ask and smile, people are intrigued. It’s about smiling a lot and explaining yourself. It’s not rocket science.”
As the summer concert season begins in Brooklyn, tens of th 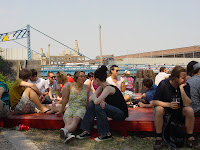 ousands of music fans will flock to East River State Park, the Prospect Park Bandshell and the Music Hall of Williamsburg for a variety of musical acts and performances. These spaces define the neighborhoods they are located in, but they are fixed and expensive to rent. Instead of booking events in established spaces, MeanRed has chosen more unusual, raw spaces, where the ambiance of the location strongly influences the creativity of the musicians and the perceptions of the audience.
Production companies like MeanRed are part of the pop-up phenomenon that has been hitting North Brooklyn recently, including retail spaces, restaurants, and art galleries.
They are the often the first organizations to reimagine a space that has been blighted and abandoned or draw attention to an area that has been underutilized. This method creates some unexpected political consequences in the neighborhoods they hold events. MeanRed is increasingly teaming up with local Friends of Parks groups such as the Open Space Alliance, to talk about holding concerts in city parks such as Sternberg and Cooper Park where the Parks Department hopes to add more programming. Assuming the permitting and liability issues can be worked out, the company is looking to partner with nonprofit groups that have sites in Greenpoint such as warehouse space or renovated housing space they can use for events.
As MeanRed expands throughout the neighborhood it will be interesting to see how they will 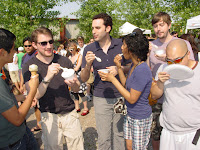 engage in some of the political issues that have affected the neighborhood for decades, such as open space and public access to the East River waterfront, the need for affordable housing, the increasing presence of blighted lots in Williamsburg, and the cleanup of polluted waterways. They have already staked out a position on Superfund designation in the Gowanus Canal, coming out against the EPA’s involvement because they believe the agency will clean the site too slowly and shut down their popular outdoor summer space, The Yard.
This past weekend, revelers waited two hours for homemade tacos and huraches at the reopening of the space and on Sunday, danced for four hours on the banks of the Gowanus to a lineup of international DJs. Whether this group of young people can be mobilized to get politically involved in local issues is a question MeanRed producers wrestle with on a daily basis.
“It’s certainly something that’s near and dear to our heart but it has to be the right fit,” said Gottstein. “When we do community events we have organizers present who are tabling, but it’s hard to have Transportation Alternatives tabling at a warehouse party.”
Collaboration among local political clubs and interest groups such as New Kings Democrats, TA, and Neighbors Allied for Good Growth, is already occurring, but turnout for political debates and rallies in that are unconnected to the Obama movement have been light this Spring. Perhaps this is what political organizing could look like in New York City in the coming years. After all, there are few better ways to get people excited about affordable housing, blight and waterfront parks than holding a concert in one of those spaces.
Posted by Aaron Short at 5:05 PM

Wait a minute -- you're up another column? How many is that anyway?