I'm dumb, it's a rezoning-action. I thought I had found the one.

Tonight, the Community Board One ULURP Committee will hear the city's rezoning action on the Broadway Triangle, essentially a key step in redeveloping the 31-acre site in Williamsburg. Press Row is wondering what will transpire tonight and whether we should be prepared for another controlled riot. Broadway Triangle Community Coalition members have been meeting this past week to discuss their strategy and I believe they will not demonstrate to the same degree that they did when they disrupted last month's full community board meeting. 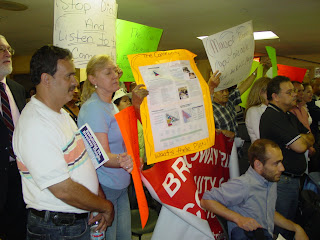 Hasidic community members make up nearly half of the ULURP committee, so it is likely that this rezoning action will sail through committee and be taken up by the full board on July 14. Still, it will be interesting to see what Churches United for Fair Housing's Rob Solano says, how CB1 member Esteban Duran acts, and what incoming Chair Chris Olechowski smells like. I bet it's a mix of Manhattan Specials, kielbasas, and musk.

The critical votes to watch tonight will be CB1 executive committee members Ward Dennis and Del Teague, who Solano and Duran should have been lobbying heavily for months. It appears they have only started those efforts, and it could be dificult to sway older community board members who were displeased by the protest on The Chairman's farewell meeting. HPD officials will be back tonight, so yes that means that Del Teague and Jack Hammer could be in the same room again. As Jack Horner would say, those are some great names.