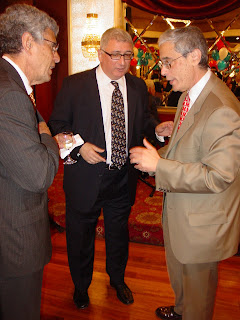 "This Polonaise place is nice. Think Community Board One would let me add 18 stories on top of it? I have Jed Walentas on speed dial." 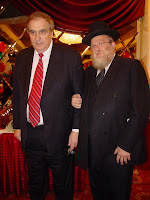 I never know what to make of Brooklyn's old school political clubs. There's Assemblyman Vito Lopez's Knights of Columbus Clubhouse on Wyckoff Avenue in Bushwick, which has neither Knights nor is a clubhouse, but is more of a political nerve center with wallpaper by way of David Lynch circ 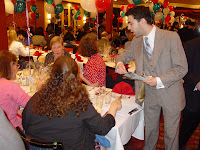 a 1973. There's the Smolenski Club, which has currently been taken over by council candidate Evan Thies and his helper elves. There's the Brooklyn Democratic Club which once met on 201 Montague Street, but the site is now a Chipotle and the organization is likely defunct save for its lone surviving member, Assemblyman Joseph Lentol. Just kidding, Amy! 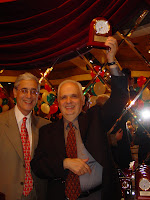 Then there's the Seneca Club. Co-Chaired by Democratic District Leader Steve Cohn and Community Board One District Manager and Council Candidate Gerald Esposito. The Seneca Club was actually founded by the Seneca Tribe, one of the six tribes of the Iroquois

Confederacy, which were headquartered in Williamsburg before they were forced to move from their 1-bedroom hut after developers obtained nearby land and constructed a series of Iroquois longhouses along the waterfront.

Actually, I have no idea how the Seneca Club started and it's too late to call Steve Cohn. Cohn has been hosting well-regarded political events in Brooklyn for several years, and ran for City Council once, in 2001 against then-challenger David Yassky. Some political observers believe that Cohn could have garnered more votes if the democratic primary didn't happen on September 11th. It is all water under the bridge these days, and Cohn seems happy to be a District Leader and emcee events such as Thursday night's annual Seneca Club Dinner. 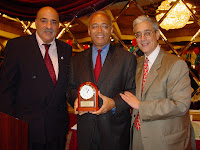 This year, Cohn and Esposito emceed the affair held at The Polonaise and dozens of Brooklyn (and citywide) notables showed up to collect awards. I dressed up in a tuxedo because Greenpoint Gazette Publisher Jeff Mann said the event was black tie. It was not. I looked like one of the waiters. Joan Millman asked me to fetch her a drink. I did not oblige Isaac Abraham. 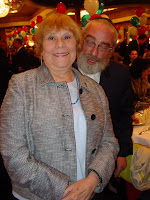 The Seneca Club dinner is is the kind of event where elected officials walk down one aisle, shake a few hands, pose for a photo with their award, and then get the heck out of there. Some stayed for the food, which consisted of a variety of sausage-like dishes in heavy sauces, sauteed chicken, and of course, pierogies. I ate maybe sixteen of the suckers, washing them down with a glass of red wine, two Zywiecs, and a handle of cognac, in that order. 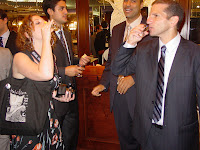 To Steve Cohn! L'Chaim!
I always like seeing candidates for office running against each other in small, enclosed spaces, 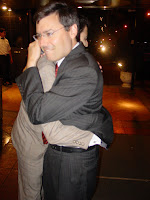 especially if the race has the potential of getting nasty. The Seneca Dinner had Melinda Katz, David Weprin, and (eventually) David Yassky, as honorees, but alas, they weren't there at the same time. Yassky came three hours late, and greeted Thies body man Nick Rizzo while still talking on his blackberry. I think it may be actually glued to his hand. Easy, Nick. Hey now!

Evan Thies came by on the early side, greeting the Joe Lentol table and stopping by a few other places, but I didn't see him later on. Doug Biviano and Isaac Abraham were there too, stopping by to say hello. Maritza Davila, a candidate for city council in the 34th District stayed for much of the evening and sat next to Community Board Four Chair Julie Dent. NBDC Rich Mazur seemed to know who Davila was, and they talked for a bit, but Assemblyman Lopez mostly wanted to talk up Steve Levin, his candidate for the 33rd District. In fact, everybody wanted a piece of Steve. Zuch a nice young man! Easy, Joan Millman. Hey now! 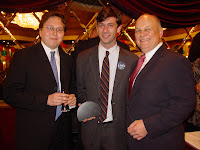 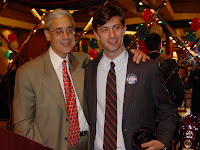 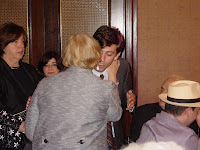 It's always nice to see the Brooklyn Optimist's Morgan Pehme. In case you haven't seen it yet, Morgan put together this video for Gerry and he is his campaign manager in the race for the 34th.


Morgan doesn't like Vito Lopez. Vito doesn't like Morgan Pehme. Therefore, it must have been interesting when they found themselves sharing a stage with only a 125-lb Steve Levin standing between them. Read more about the exchange from Morgan's perspective here. 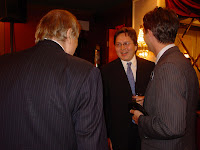 "Seriously, you guys, you're great. I'm a big fan."
Finally, I have to thank Steve, Gerry, (and definitely Jeff and Juliet) for making the night run smoothly. Good luck with petitioning! 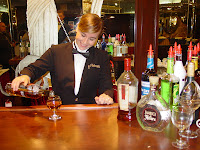 What do we want? Open Process? No! Open Bar!! 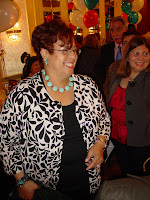 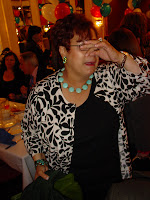 Another great post, but don't blame me for your fashion sense!

Glad to see all candidates were swine flu free in time for the event.

Your explanation of the origins of the Seneca Club is only partially true. After being displaced, the tribe moved upstate and created an alternative utopistic community in Seneca Falls. They reappear in Greenpoint each June as part of an early soltice ritual, offering blessings (disguised as plaques) to those who inhabit their sacred grounds.