Bushwick Open Studios aka, “What’s oozing out of that vagina?” 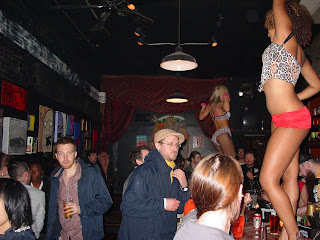 "Welcome to Bushwick Open Studios! Now is there anyone I can get naked for?"

With over 200 studios and events happening throughout Bushwick simultaneously, it’s nearly impossible to visit everything, but this weekend I tried. I failed. Oh well. Damn you L-train shuttle! 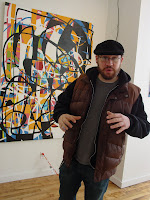 shoulder-to-shoulder crowded and nearly every square inch of wall space was covered with cartoon tentacles, blimps, and mummies. Mighty Tanaka’s Alex Emmart, who curated the exhibit, told his artists to avoid the scene because the NYPD vandal squad was parked outside and might try to arrest them. The police that I saw cruising around were mostly transit authorities, but you can never be too careful after the Shepard Fairey arrest. Or too paranoid.

After a couple of Saturday morning errands in Williamsburg, I dropped by Norte Maar for a mimosa to kick off a full day of studio visits. Jason Andrew, who curates the Wyckoff Avenue exhibit space, said that he went through twelve bottles of champagne before 1 PM and whipped up a vodka mimosa for me instead. Thanks Jason!

I headed down towards the Bushwick Branch of the Brooklyn Public Library to facilitate a political talk on competing needs for space. Hats off to all my guests: Councilwoman Diana Reyna, El Puente’s Luis Garden Acosta, Make the Road’s Oona Chatterjee, NAG’s Michael Freedman Schnapp (who biked down from Williamsburg Walks), and AIB’s Laura Braslow. It’s always fun to have some of the neighborhood’s major players in a room talking about gentrification, who’s responsible (answer: not the artists), and who can fix it (answer: this time it’s the artists). 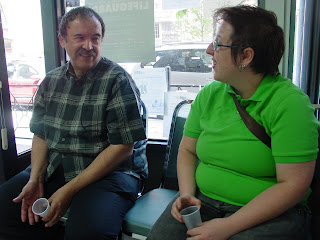 Then it was time for the Bushwick Biennial, which featured a variety of strong works at Nurture Art, English Kills, Grace Space, and Pocket Utopia. I made it over to English Kills, which wrapped up its busiest opening ever, as gallery director Chris Harding mentioned he had over 500 walk-ins that afternoon. Among the crowd were New York Times art critic Roberta Smith and Village Voice art critic Jerry Salz. Ms. Smith apparently asked how long the show will be up, which is a good sign for English Kills and perhaps she will be writing something about them soon. 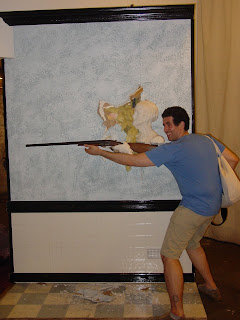 The other nice thing about this festival is that I finally get to meet people in person whom I've heard about or read about, such as BushwickBK's Hrag Vartanian, (above) who was a good sport and posed in the installation. Hrag recommended visiting a number of studios, including Ann Oren, and the Gods of Monsters English Kills annex where Chris Carter and Andy Piedilato were holding court.

The sad news of the weekend had to be Austin Thomas' decision to close Pocket Utopia, her 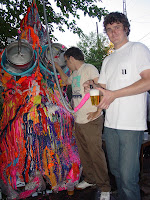 sliver gallery which promoted many local artists and developed a much-welcomed community space on a partially desloate stretch of Flushing Avnenue. It felt like a greatest-hits exhibit, with local luminaries and members of the Pocket Utopia extended families such as Brece Honeycutt, Audra Woloiec, Molly Larkey, Rico Gatson, Kevin Regan, Ben Godward, Jonathan VanDyke, and Andrew Hurst in the house. Godward served beer out of two kegs conveniently planted in the bosom of a giant paper mache woman sculpture called "Goddess," while Hurst played a drum solo in the basement, causing the tenuous floor to shake. Good times.

Sunday was a humid blur. I got to see some of my favorite artists, including Layton Hower, Gabbe Grodin, Matt Brownell, Megan Hays (wait, this might have been Saturday. Where the hell was I then?), Andrew Robinson, Alexandra Pacula, Ali Aschman, Ann Oren, and Friends of Paul D'Agostino, also known as Centotto. When you prounounce the name of Paul's gallery, you are required to make an elaborate air kiss gesture that Paul is more than happy to teach you. I missed Deborah Brown, Jennifer Harris, Ty Tripoli, and a bunch of other people, and I'm really really sorry if I missed your show. Maybe over the summer! 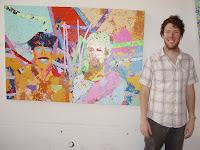 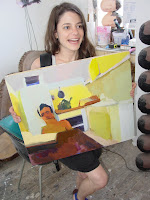 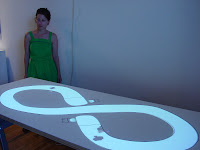 Finally, we must address vaginas. Artists across multiple mediums kept including them in their work this year, from vaginas oozing salmon roe in a video at English Kills to an (unfortunate) interactive dance performance at Chez Bushwick that employed a lot of fake blood. As one audience member said, "Didn't my parents suffer through the turmoil of The Sixties so that I wouldn't have to experience this kind of art?"

The vagina talk continued at Chris Henderson's birthday party this weekend. Henderson lives across the street from an abandoned doll factory, which then led several guests to talk about a movie (not Lars and the Real Girl... something weirder) where men would pay thousands of dollars for lifelike, anatomically correct 100-lb female dolls. Apparently, the company offers to replace the doll vaginas which would often break down due to overuse. What do you suppose the name of the guy whose job it is to do that? Synthetic vaginal technician? Gynecological engineer? My cousin Elliot (pictured below)? 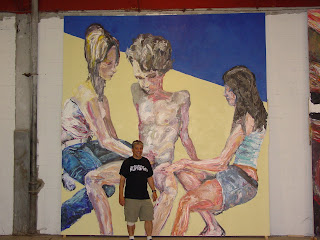 Great article!! I kinda like those 20 foot square teenage hand job paintings - I mean Why Not??? I am glad you have a blog.