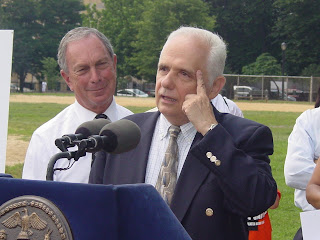 Williamsburg- I just realized I passed the 100-post watermark and that calls for a celebration of some kind. 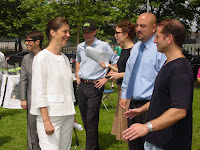 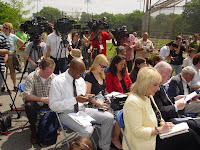 It's always nice to see the City Hall desks come out to the hood every once in a while. Today, everyone was here to support Summer Streets program in McCarren Park, of which Williamsburg Walks is an important part of. We had appearances by New York Daily News' Adam Lisberg and Celeste Katz (I think), Metro's Amy Zimmer, right, Newsday's 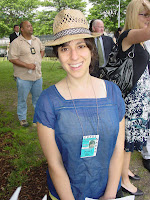 Michael Frazier, CBS 2's Marcia Kramer, and the Dean himself, WCBS 880's Rich Lamb. Not present was Mayor Bloomberg's favorite reporter, the New York Observer and PolitickerNY's Azi Paybarah. Maybe the Greenpoint Gazette's Juliet Linderman or that Polish dude hanging out behind the cameras can liven things up instead. 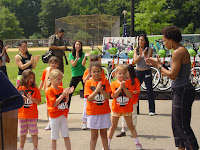 A lot of community members came to the event too, including a class of Greenpoint YMCA children enjoying their first day of summer vacation. It was fun watching the kids dance around and do aerobics routines as Press Row took photo after photo and the videos shot some B-roll. At least it was fun until the soundtrack kicked in some Michael Jackson. I asked the DJ about the choice in music and he said the set list was determined and preset several days ago. Oops.
While the Summer Streets program is important, I saw this as an opportunity to see what Parks Commissioner Adrian Benepe has been up to recently. There are lots of parks openings in North Brooklyn this summer (I'll go over the full update later this week), but I wanted to know how he liked the Quidditch tournament his son Alex threw in McCarren Park last weekend. Both teams were muddied and soaked after they were done, and according to Benepe, the entire Middlebury team came back and showered at his apartment. I must add, it's nice to see the Commissioner out in the neighborhood before he gets back to filming an exciting Season Three of The Reaper. 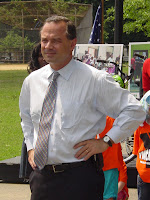 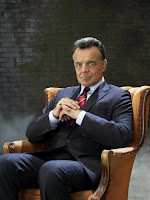 Anyway, thanks to all the readers for paying attention. I never really gave blogging much thought before this year and now I can't stop. Okay, enough silliness. Well, maybe one more photo post... 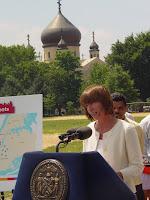 Congrats on hitting the century mark. Your wedding invitation is in the mail:)