Does anyone know what EWVIDCO stands for? 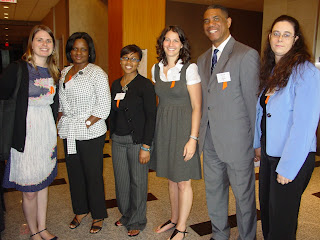 Yes, it stands for the East Williamsburg Valley Industrial Development Corporation, and it's very important. How important? None of the candidates for the 33rd and 34th District city council races showed up to their 2009 annual trade show and luncheon at Steiner Studios yesterday morning. What they missed was an opportunity to schmooze up North Brooklyn's local business leaders like MetroEnergy's Paul Pullo, Filco Carting's John Okun, Waste Management's Rachel Amar, Boars Head's Bob Mattia, and Martin Greenfield, owner of Greenfield Clothiers, easily the best dressed person in the room.

Martin the Tailor from Ed David on Vimeo.

But enough about candidates. Onto the business leaders! Many local manufacturers and corporate representatives were in good spirits, despite the recession, but that may have been the extra oxygen that EWVIDCO was pumping into the room. I had a sudden urge to play the slots with these guys. 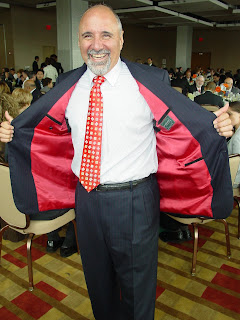 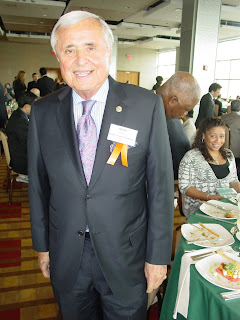 Paul Pullo, above left, is excited not only about B-100 Biofuels which could see additional tax credits in the coming years but also because he's back at Steiner Studios for the first time since his son Paul's wedding, which was also held on the third floor of Stage 6. How is married life different than fiance-life?
"It hasn't really changed that much," said Paul the IIIrd. "We're used to each other." 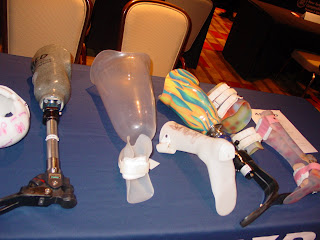 Ever wonder what the inside of a fake leg smells like? It's disgusting.
Many Brooklyn vendors brought their best "patent pending" samples to the trade show, including glass countertops made of recycled Heinecken bottles, medical supplies 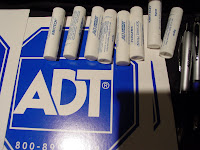 , fancy CISCO Systems business phones, biodiesel bottles and Italian pastries (not the same company). ADT, the home security company, showed off a state of the art business alarm system, complete with four monitors and about eight split screens, though at least two-thirds of them were tuned into old episodes of 30 Rock. Also, there was ADT lip balm. This is what security tastes like. 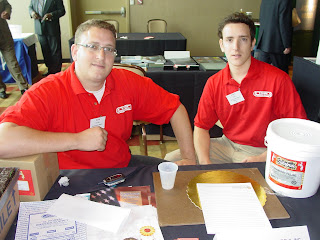 Seth Rogen, left, and Paul Rudd, right, stopped by to hawk raw materials from David Rosen Bakery Supplies
At the luncheon, Borough President Marty Markowitz honored the board members and presented a plaque. He's still going on about getting a tailor-made suit from Martin Greenfield. Get in line, Marty. By the way, Mr. Greenfield, I'm a 38 regular and I'm thinking gray, two-button, slim lapels, just like Don Draper. 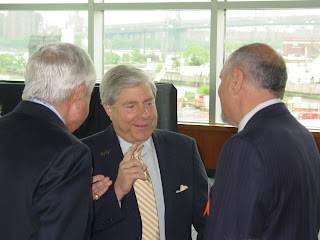 "Size 44 Short Mr. Greenfield! I can come in and get measured anytime you want!"
Posted by Aaron Short at 3:51 PM