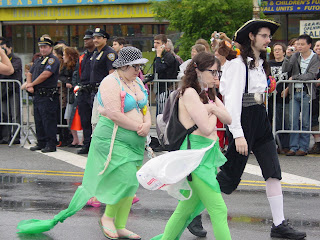 It rained and rained and rained some more this weekend, but Brooklynites would not let the weather detour them from enjoying the Mermaid Parade in style, clothing optional. I packed an umbrella and kept the short shorts at home (madras instead), and ran into all sorts of 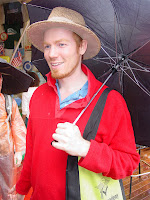 characters. Headlined by The Wolf, with special guest appearances from Reverend Billy of the Church of Stop Shopping and Norman Siegel's slightly less than enthusiastic volunteers, this year's parade was a little subdued. I only saw two Warriors-themed floats, and one of them was promoting a roller derby league. Lots of anti-development, "Save Coney" fliers, too, and only a few anti-Bloomberg mentions, but very little energy all around. Hey, wait a minute, is that my best friend from high school who didn't give me a call that he was in town this weekend? Why, yes it is! Hi Franny! 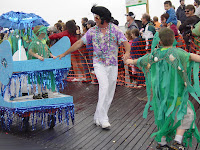 Council Candidate Doug Biviano, center, is once again in the middle of things. 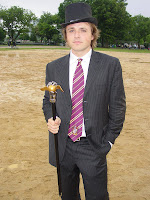 From the parade, I had to check out an MTV-sponsored Quidditch match that just happened to be playing at McCarren Park in Greenpoint. When I was there, I ran into two sweaty, muddied college teams of Quidditch players from Emerson and Middlebury with broomsticks and capes. I also ran into a recent college graduate, wearing a full suit and maroon and gold tie named Alex Benepe, left. As in Parks Commissioner Adrian Benepe. Notice how poorly maintained the McCarren ballfields are in the background. I gotta give props to Open Space Alliance Exec Director and Parks Department Staffer Stephanie Thayer for putting this one together in a completely non-diabolical way. 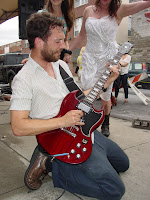 Finally, it was Make Music New York, all over New York Sunday, with a couple of dozen accordian players in Central Park and some punk rockers shredding up Metropolitan Avenue in Williamsburg, right next to my old laundromat. I avoided all of those, and took in a little Pass Kontrol instead. You could hear them all over Bushwick. Or at least right outside Northeast Kingdom. These guys don't break a sweat. Ever.
Posted by Aaron Short at 6:30 PM