New York City's parade-based economy gets a welcome infusion of cash as the Gay Pride Parade kicks off Sunday in the West Village (where else?) as well as several small but extremely fun events throughout Brooklyn. Expect some parties to take on a somber tone, as worldwide pop-icon (and statute of limitations-supporter) Michael Jackson's untimely death may shift the soundtrack twenty five years back. It was hard to find a car, taxi, or public bus that wasn't blaring the entire Thriller soundtrack. As my friend Karen said, as she climbed up the narrow stairs for an art opening yesterday, "I swear if I hear one more person say 'Michael Jackson tribute party' I'm going to f###ing lose it." Sorry Karen, we're piling on too: 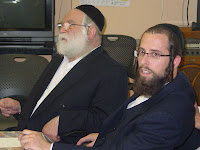 Let's take a look at the round-up this week, as Ben Muessig's Broadway Triangle For Dummies is finally online at The Brooklyn Paper. We hear the New York Times is snooping around Williamsburg, but they haven't written anything about it yet and I'm eager to see what they put out there that we don't know already. Greg Hanlon has his Slate debut and Greenpoint Gazette's Juliet Linderman has her wrap on the CB1's ULURP Committee meeting where the rezoning was advanced, as well as a burglary at Greenpoint Mexican institution Papacito's. The restaurant was jacked on Sunday and lost $10,000. I'm guessing they couldn't fit 5000 tacos in the safe, so they just took the safe. How did this break down? Did the perps ask for $10,000 and three tacos to go, or did they go with the seitan quesadillas that everyone really likes?

It's nice to see that politicians such as Malcolm Smith and Dominic Recchia are taking the time out of a busy legislative session to issue press releases about how they are deeply saddened by the losses of Farah Fawcett and Michael Jackson. Guys, this is what facebook is for.

Don't forget to check out The Courier's Tom Tracy's reporting on a bizarre holocaust memorial story in South Brooklyn. He's got an update this week too.

The rain is expected to clear this weekend, so check out Ad Hoc Art's opening tonight, English Kills' concert on Saturday, and Pocket Utopia's salon on Sunday and other Bushwicky events, or Blonde Redhead at Prospect Park.

Finally, I'd like to give a shoutout to State Senator Tom Duane, whom I wrote a profile about for The Capitol. He could use a relaxing weekend. Tom, it's been a tough session and you need to catch up on some DVDs this summer in addition to Doubt, so let's add Shaun of the Dead and Reality Bites, and Dazed and Confused which pretty much sums up what's going on up there right now.