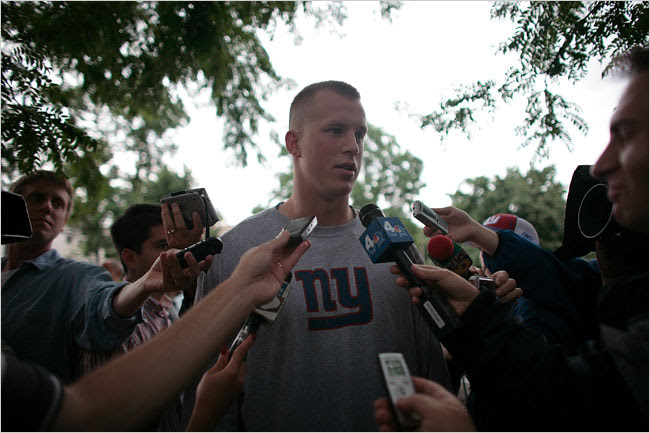 Giants Tight End Kevin Boss said his favorite weekly roundup of Brooklyn events is The Short List
No, no, not that Boss. BOS! Bushwick Open Studios! The not-so-nascent do-it-yourself arts festival that is sweeping through Bushwick this weekend like a retrovirus! With the festival getting larger and attracting more media attention, the challenge is going to be, can they let BOS just be BOS? Find out by taking the L shuttle bus to Morgan or the J to Myrtle, pick up a map and walk around a little. You'll probably see me out there. I will be everywhere, all at once.
Bushwick galleries are stepping it up for the festival, starting with Factory Fresh's opening tonight, featuring Avoid, Bloke, and Faro, which could very well be the highlight of the weekend. Saturday night, check out the Bushwick Biennial, with openings at English Kills, Nurture Art, Pocket Utopia, and Grace Exhibition Space.

Wondering what else to see among the nearly 225 events happening over the next three days? We've got previews from Anna D'Agrosa's BushwickBK weekly picks, a nice roundup from Benjamin Sutton at L Magazine, Anne Wehr's Arts in Bushwick analysis for WNYC, a listing in Flavorpill, and a little neighborhood paper called the New York Times.
While it may feel like Bushwick is the center of the universe this weekend, there are a few other things going on around the neighborhood, from the Renegade Craft Fair at McCarren Park to Williamsburg Walks Saturday on Bedford Street, to the Brooklyn International Film Festival in Brooklyn Heights, and barbecue at The Yard. 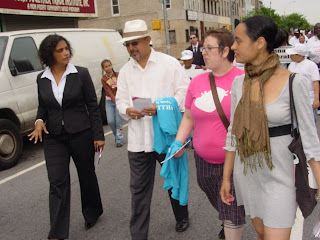 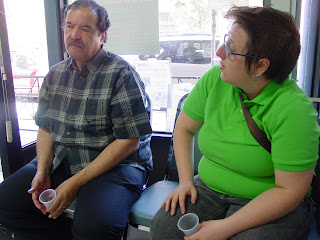 Speaking of the New York Times... hey guys, thanks for joining the party! Unfortunately, you're two months late. Well, Queens Assemblywoman Marge Markey must be pretty pleased with this. I'm hearing that her amended staute of limitations bill is likely to get introduced for consideration to the full Assembly in the next two weeks while Assemblyman Vito Lopez's competing bill won't even make it out of the Rules Committee let alone get considered on the floor. 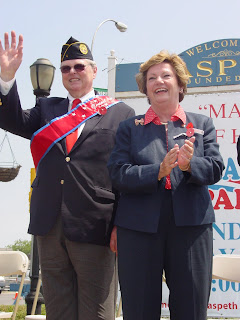 Back in Brooklyn, it has been a big week for neighborhood development projects, which have either received the green light to continue or have stalled indefinitely. We've got word this morning that Atlantic Yards might be having some problems, now that Forrest City Ratner fired Frank Gehry and will hopefully replace him with the guys who built the Pyramids to get things moving along.

Props to Nikki Bagli's dad for dropping the story in the New York Region and be sure to read Norman's Oder for his take on the design improbabilities. Then there's Dock Street DUMBO, which received preliminary approval from two City Council subcommittees and has received Speaker Christine Quinn's support. On the minus side, the Parks Department is slashing $57 million from their budget for park construction in North Brooklyn over six years. That means most portions of Bushwick Inlet will be delayed indefinitely and 65 Commercial will probably be an MTA bus lot until a Republican takes the White House again. There's a report from the Daily Eagle about the Kent Avenue Bike Lane plan coming to Community Board 1 on Tuesday and news about Williamsburg and Greenpoint contextual rezoning hearing in Manhattan. And finally, there's the Broadway Triangle, which is slowly moving along, despite efforts from the Broadway Triangle Community Coalition to push an alternative development plan envisioned by Pratt Institute graduate students. 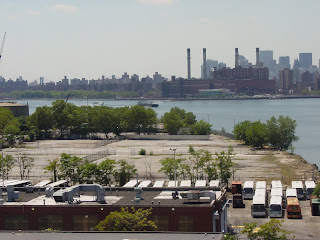 This site will never, ever be a park, will it?
And finally, every week, one loyal Brooklyn reader keeps sending in requests for me to link up a video of David Tyree's implausible Helmet Catch. I always refuse, but this week I am changing my mind. Sigh. Allright. Here it is.