Story of the Day 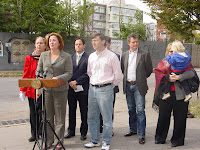 Some urban policy experts say the city did not do enough to attract concessions from developers for things like enhancing the subway service to that section of Brooklyn, which was already overcrowded.
Now the administration, which rejects that view, is working to rescue struggling projects. The long-stalled City Point development is to get $20 million in recovery bonds.
In July, when scores of other new condominiums were not selling, and developers risked default, Mr. Bloomberg and the Council stepped in to announce a $20 million pilot program to buy the empty units and use them as affordable housing.
“Private developments that sit vacant or unfinished could have a destabilizing effect on our neighborhoods, but we’re not about to let that happen,” said Mr. Bloomberg.
Actually, Mr. Bloomberg most likely fostered some of the real estate speculation with policies that invited development. But even those who say the mayor’s development record is mixed credit him for taking a long view.
Posted by Aaron Short at 1:27 PM