It's the Playoffs... and that means mayoral wagering.

From the office of the Mayor...(and yes the Yankees will slaughter the Twinkies tonight) 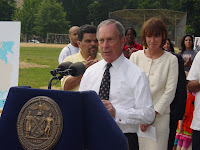 announced a friendly wager on the American League Division Series between the Yankees and the Twins. If the Yankees win, Mayor Ryback will send Mayor Bloomberg a bushel of Honeycrisp apples and a case of beer from the Surly Brewing Company. If the Twins win, Mayor Bloomberg will send Mayor Ryback an assortment of urban produce from the New York Botanical Garden and its Bronx community garden partners and a case of Brooklyn Lager. Every additional playoff game at Yankee Stadium pumps $5.7 million into the local economy and has a total economic impact of $11.9 million, according to New York City Economic Development Corporation.

“The Twins made a highly impressive season-end run to make the playoffs, culminating in last night’s thrilling win,” said Mayor Bloomberg. “But now it’s playoff time, and tonight we welcome them to the Bronx . The Yankees have had an unbelievable season full of comebacks and milestones, and the next one will taste even sweeter with Minnesota ’s apples and beer.”
Posted by Aaron Short at 6:21 PM