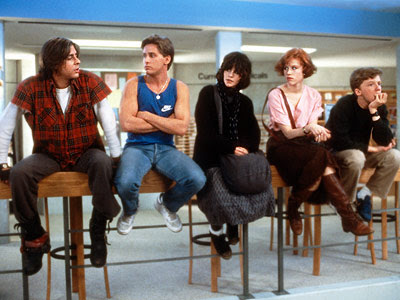 The 33rd District City Council campaign has devolved into high school bickering. So much so, that our (Community Newspaper Group's) solution was to round up all the candidates and sequester them in the Brooklyn Community Access Television (BCAT) studios for the entire morning yesterday until they worked out their differences. We also gave them bagels, fresh fruit, and lots of coffee. It didn't work. They're nastier than ever. Below, is a behind-the-scenes look at yesterday's closed-circuited debate, hosted by Brooklyn Independent Television, The Brooklyn Paper, and Courier Life. 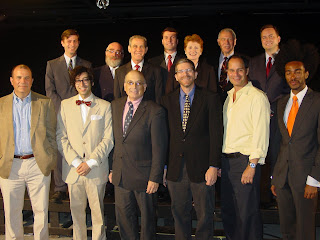 Ok, before we go to this, let's settle who's who in this analogy. Steve Levin, who did show up yesterday, is obviously Brian (Anthony Michael Hall), Jo Anne Simon is Claire (Molly Ringwald), Isaac Abraham is Allison (Ally Sheedy), Evan Thies is John (Emilio Estevez), Doug Biviano is Andrew (Judd Nelson), Ken Diamondstone is Richard Vernon (Paul Gleason) and Ken Baer is Carl the Janitor (John Kapelos). They only met eight times, but it changed their lives forever. Wait, does this make Gersh Kuntzman John Hughes? Discuss! 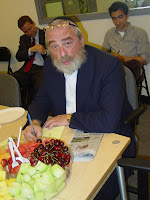 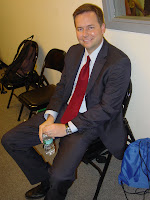 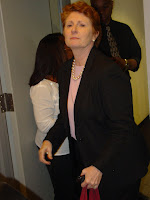 By 9:30 AM, the candidates had swarmed into a small, but cozy green room at BCAT's 57 Rockwell Place studios. Isaac, Evan Thies and his manager Kevin Lawler, Steve Levin's angels (Deb Feinberg and Boerum Hill's own Hope 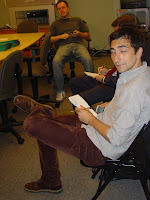 Reichbach; Allison Frost was MIA) were scattered throughout. Members of the Doug "The Biv" Biviano fan club were tucked into the hallway, including a very busy Morgan Pehme wearing Matrix-like sunglasses, discussing last-minute debate strategy, I gathered. Jo Anne Simon arrived a few minutes later, absent her usual body girl, Kelly Donnelly, and The Kens appeared as well, though they did not arrive together. Isaac pulled be aside and corrected an earlier quote of a phrase he made at the last NAG debate. He said, "Life is like a bicycle. In order to stay balanced, you have to keep on moving," not whatevertheheck I wrote in an earlier post. I didn't get to ask him what he thinks about the Kent Avenue bicycle lanes, though he doesn't particuarly like them. The Brooklyn Paper's Ben Muessig, who has a wrap of the event here, stayed in the Green Room to document the hostility. No one was talking to each other, mostly looking down at their blackberries, and no one was eating anything either. I tried to break the ice.
"Who lost money on the Red Sox this weekend?"
"What? What kind of a New Yorker are you?" said Abraham.
"I'm a Red Sox fan..." said Thies, quietly.
Sorry Evan. I may have outed you. 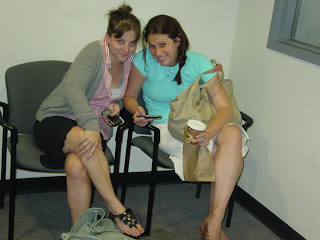 Go Angels, Go!
The debate began close to 10 AM and ran about an hour. Gersh and I moderated, and we covered schools, the Broadway Triangle, Atlantic Yards, government reform, and asked the candidates to ask questions to each other, which is always fun. Most of their positions on projects, particularly development projects, are well known, and Norman's Oder has an extensive round-up of the race so far on his blog, Atlantic Yards Report.
There were some funny exchanges before the debate, such as when one of the BCAT sound guys said Doug Biviano and Ken Baer looked alike (dark suits, white shirts, red ties), Doug told Ken, "What are you doing Ken?", Ken looked at Jo Anne Simon and said "You'd support my disability, right?" and Jo Anne said "Of course I already have, you just don't realize it." We didn't even start yet. Also, everyone was making fun of my bright red socks seconds before we started taping. Guys this isn't Frost/Nixon. This isn't even Wayne's World.
Sadly, I could not take notes during this debate, beyond intermittent scribbles which were likely easily picked up by the tape. During the question-to-question period, Thies' resignation from Community Board 1 came up, as did Levin's associations with Assemblymember Vito Lopez (he is not currently on staff with Lopez as of six weeks ago and has taken an extended leave of absence), and Jo Anne's record, affiliation with Central Brooklyn Independent Democrats, and challenging the Kings County Democratic Party leadership. Simon bristled after being targeted by Biviano, Diamondstone, and Baer, though Levin took a fair share of questioning on his 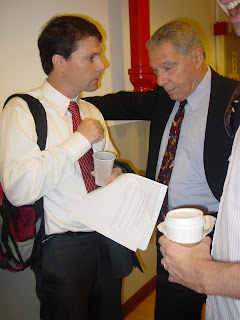 positions on Atlantic Yards and the Broadway Triangle. Thies was largely quiet. Baer spoke about how he was not beholden to any special interests... or campaign staff, loved ones, pets, and property... and Biviano made an interesting hand gesture, wiping his fingers together (I assume to indicate ties to special interests), during Diamondstone's closing statements, referring to several other candidates.

Ken Diamondstone must have felt bad for criticizing Jo Anne, because he approached her apologizing that "it wasn't personal" before Jo Anne answered back, "I don't want to hear it." She left quickly, as did several other candidates, though Diamondstone hung around for twenty minutes to talk with The Courier's Tom Tracy (wrap coming shortly) about whether he would run against Senator Daniel Squadron if he didn't happen to win this time around. Sigh. They're at it again tonight at St. Francis College, courtesy of Citizens Union. Why? I have no idea. We're up to 7 now, with two more debates being planned.
Posted by Aaron Short at 3:47 PM

I think you ma want to check out this link. It's a trailer for a doc about the Atlantic yards situation: