I have been writing candidate profiles for the past month, and we continue with City Council hopeful Doug Biviano. Biviano reminds me of a long-separated Wilson brother (Royal Tenenbaums more than Old School) and he told me a guilty pleasure after a long day of campaigning and cleaning the brass fixtures in his Grace Ct. building is to veg out on the sofa to Wedding Crashers. Makes sense. Read on to learn about your neighborhood handyman... 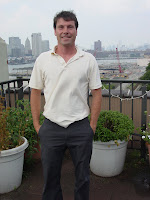 For the affable Brooklyn Heights resident and 33rd District City Council candidate Doug Biviano, his campaign can be distilled into two fundamental issues: affordable housing and health care.
He would know. A superintendent in a late 1920s brick building on Grace Court, Biviano may lose his job on September 15, the day of the Democratic primary, because his family health care plan is too expensive. So much so, Biviano and his family may be forced to leave their home.
“We’ll see. I’m going to fight like hell. I don’t want to go anywhere else. We’re rooted at P.S. 8.”
Biviano and his family are rooted in Brooklyn Heights too for three generations. He grew up in Breezy Point and Mill Basin, attending P.S. 207 and P.S. 143, but spent many of his teenage and young adult years in a Depression-era brick building on Remsen Street, where his father, a transit authority worker, served as the building’s superintendent.
“Right there in 1G,” said Biviano. “I used to cook a lot of meals there. I think those are the same cabinets. He put them in.”
After earning both his bachelor’s and master’s degrees in civil and environmental engineering from Cornell University, Biviano worked as an environmental and geotechnical engineer in Buffalo and outside Denver. He has even worked in the e-commerce industry, programming databases out West, and installed a solar-powered battery system on his own sailboat (which he sailed around the world, as he memorably explained in a debate in Williamsburg).
When his wife became pregnant, the Bivianos chose to move back to Brooklyn Heights so their children could grow up and attend schools in the neighborhood he remembered so fondly.
“We really have to protect our neighborhoods,” said Biviano. “We’ll never see architecture like this again. Never, never.”
Being a handyman while running a political campaign has its advantages. Biviano made the sign resting above his Montague Street headquarters and he built and maintained his own campaign website, without having to outsource the technical work.
When he gets home from a long day of campaigning, he still has to do all the duties of a building superintendent.
“When I come back, I have to clean the brass and take out the garbage, mop the building, wipe the brass down,” said Biviano. I have to support the family.”
Biviano believes that his experience managing buildings, working as a civil engineer, and 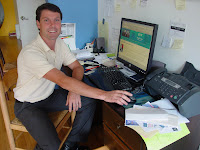 confronting employer-based health plans will help him if he is elected to the City Council. Already, he has held a panel discussion about the history of employer-based health care in his campaign office and started a petition advocating for a single-payer plans.
He believes a councilmember should build coalitions and lobby with other cities to support a resolution for single-payer health care and use the bully pulpit to get Mayor Michael Bloomberg on board.
“This isn’t a federal issue, this is a local issue,” said Biviano. “It is in the charter to care for the health and welfare of the city. It’s a life and death issue.”
When he is on the rooftop of his building, he gazes at the unfinished and half-empty modern condominium buildings that share the city’s skyline with the iconic skyscrapers of earlier eras. He believes that they need to be filled with tenants in some kind of public-private partnership, before leaks and broken facilities render the buildings uninhabitable.
It is this engineering perspective that has propelled Biviano’s campaign and caused him to run toward broken systems, whether they involve public infrastructure, housing, or health insurance.
“Whether you are in a sailboat or a building, if you have a problem, you have to fix it,” said Biviano. “As an engineer, if you encounter a problem, you have to fix it. You can’t just run from it the way politicians do.”
Posted by Aaron Short at 1:55 PM

What a great profile. He has my vote and I have my fingers crossed. For those that think he's too inexperienced, I've long believed that you can teach the skill, but not the character required to do a job well. Doug has the character. He'll figure the rest out. Good luck!