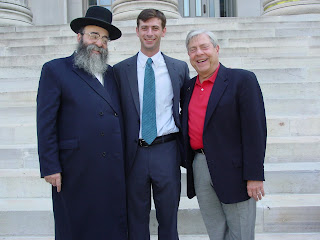 Steve Levin, center, with his Rabbis 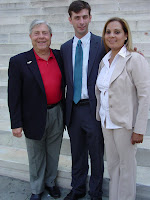 So Steve Levin picked up Borough President Marty Markowitz's endorsement this afternoon. It's a nice addition to the Chuck Schumer endorsement from two weeks ago, but I was struck by the reasons why Marty chose to endorse Steve. He kept talking about how Steve is committed to getting results while his opponents in the 33rd District race seem "overwhelmed with the process", but was vague about what this meant, beyond citing Levin's work running Assemblymember Vito Lopez (D-Williamsburg, Bushwick) office and answering constituent concerns about housing. 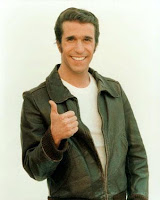 Note the use of the word "process" here, which is the same term that opponents of the Broadway Triangle rezoning action have used when describing their criticisms of the current plan advanced by Community Board 1. Marty, left, promised that an announcement on the Broadway Triangle would be coming in the next few days, though the City Planning Commission has already received this letter (it was due on August 20th). It will be news if Marty doesn't give the project a thumbs up, but we're waiting for the text. Heyyyyyyyyyy.
Posted by Aaron Short at 8:19 PM

should be noted that Marty has endorse Diana Reyna for the 34th city council race, interesting that they got Maritza in for a photo op, i guess trying to give the illusion of a Maritza endorsement.....

As a citizen of the 33rd and a neighbor of Steve Levin- I am disappointed at all the endorsements the machine was able to pull him. What will he specifically DO for north brooklyn? He skipped most of the debates, advocates policy in vague broad strokes and simply collects endorsements like medals. Oh, that's right- he knocked on a lot of doors.

Meanwhile all the other candidates are barely treading water...