Jumanji!... and other teasers for tomorrow Community News Group (Courier Life and The Brooklyn Paper) joined BRIC at the Brooklyn Community Access Television (Community Access! Yes!) for an all-day closed-circuited debate featuring candidates from the 33rd, 39th, and 45th Districts. We will have a full write-up of the behind-the- 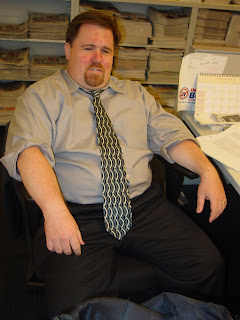 scenes machinations, including highlights such as when Isaac Abraham touched every bagel in the Green Room before picking up some cantaloupe, Jo Anne Simon fake-storming out of the room and the Diamondstone camp trying to start a rumor about it, and when Brad Lander ripped his shirt off to reveal lycra tights with a Superman logo on it. Okay, I made those up, but what really happened is even more interesting. Hell, Tom Tracy, above, spent seven hours in the studio! Check back tomorrow!
Posted by Aaron Short at 6:53 PM