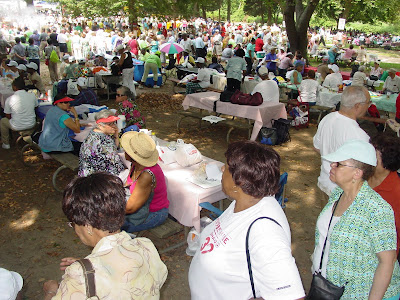 Seniors! Far as the eye can see...
Brooklyn's seniors took a break from screaming at Anthony Weiner to get on the bus to Sunken Meadows State Park for another picnic sponsored by the Ridgewood Bushwick Senior Citizens Council. The nonprofit holds two picnics a year (in late July and August) for the seniors they serve, and the picnics are legendary in staewide political circiles. I blogged about the first one last month, and this time I'll focus less on the experience of it and more on the political calculus at play. 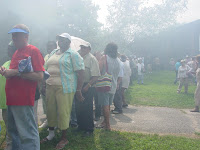 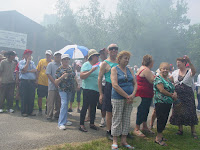 Logistics for these picnics is similar and highly efficient. Volunteers work in shifts taking tickets from seniors and manning the grills (many of them local unions) as long lines of seniors wait patiently for their meals. On the menu for lunch Thursday were steaks the size of your foot. This meant a lot of smoke. If I could barely breathe after two minutes, imagine the seniors who waited in line for half an hour. 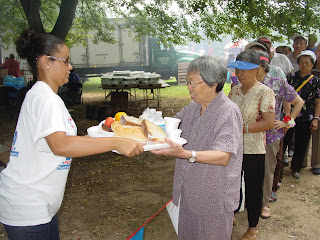 Finally!
As nice a day it is for seniors to get some fresh summer air and two hot meals, the reason why reporters visit the picnic is to hear the latest political gossip and see candidates on the campaign trail, lurking after that elusive senior vote. I also went to talk with seniors about their reaction to 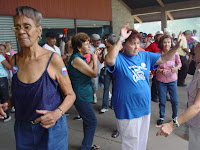 the health care policies being discussed in Washington, but they were too busy salsaing to get a into a good conversation.
"Excuse me, what do you think about single payer plan or the government-run public option?"
"Hey! Hey! Hey!" 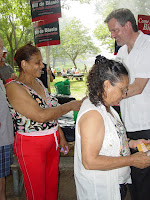 Seniors weren't the only ones dancing. A very tall Public Advocate candidate and Brooklyn Councilmember Bill De Blasio, left, moved gracefully through the lines like a shark swimming through schools of very slowly moving fish. Mayor Micahel Bloomberg stopped by later that afternoon, as did Comptroller candidate and Queens Councilmember John Liu, who said he had a great time meeting all the seniors. Meanwhile, Steve Levin, running for City Council in the 33rd District, was busy making sure things ran smoothly while accepting pecks on the cheek for admiring seniors. I'm not sure this can be emphazied enough, but Levin absolutely slaughters the over 50 female demographic. The bubbes were eating him up. 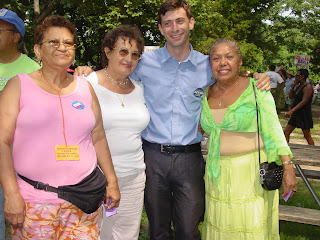 The surprise of the day, but maybe not really, was the appearance of 1st term New York Senator Kirstin Gillibrand (looks like Rabbi David 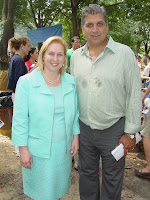 Niederman stopped by too!) who was gently sheperded by Coney Island Councilmember Dominic Recchia throughout the morning. Gillibrand, wearing a robin egg-colored skirt suit, smelled like cupcakes while Recchia gave off a summery scent of olives and Coppertone. Unfortunately, ABC did not pick up the script for my buddy-sitcom "Kirsten and Dominic" this fall, starring Nick DiPaolo and Anne Heche. Maybe next year.
Speculation has been running rampant among several City Council campaigns that Assemblymember Vito Lopez horsetraded Congresswoman Carolyn Maloney with Senator Chuck Schumer, in exchange for the Senator's early endorsement of Lopez-backed Steve Levin. Gillibrand had had a problem lining up support in Brooklyn earlier this year, and North Brooklyn insiders I spoke with believed that Lopez was leaning towards Maloney over Gillibrand in the Senate primary. Maloney even endorsed Steve Levin two months ago, but she has since backed out of the primary, facing pressure from Schumer and other state leaders. Vito certainly didn't pressure Maloney to get out of the race, but may have sensed that political winds were swirling against her and used the opportunity to convince Schumer to back his candidate for City Council, before, say endorsing a former staff member who is running for City Comptroller. Anyway, I heard the steak was excellent. 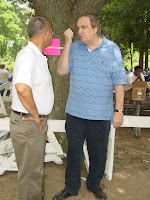 About Vito. I met him briefly around noon, just before leaving the picnic. He didn't want to talk that much, and luckily Billy Thompson wandered over to engage him in polite conversation. I didn't get to ask him about his reactions to the Times' double dipping story (triple dipping if you include the day at the Sunken Meadows beach). Probably just as well.
Democratic District Leader (and Thompson's Brooklyn coordinator) Walter Mosley was standing in the background, taking it all in. He didn't get to eat anything. Just another day on the clock.
"I'm working straight through primary day," said Mosley.
Aren't we all, Walter, aren't we all.
Posted by Aaron Short at 11:16 AM