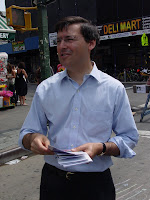 This weekend, Councilmember David Yassky (D-Williamsburg, Greenpoint, Brooklyn Heights, Boerum Hill, my pants) picked up a HUUUUUUGGGEEE endorsement, as the New York Times editorial board gave the nod to David in the Comptroller race. On the Yassky Blog, they're already crowing (this, in addition to Crain's and State Senator Jeff Klein D-Harlem). I'll have more on the comptroller race later this week, but let's break down the endorsement. Here are the most imprortant paragraphs. 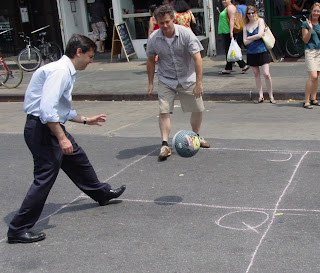 Of the four, Mr. Yassky makes the best case for making better use of the powerful tools handed a city comptroller. He promises to use the audit powers — including new ones overseeing the city’s education contracts — to increase productivity and efficiency.
We have seen in New York State the temptations and corruption that come with managing a multibillion-dollar pension fund — with huge fees handed out to political cronies and contributors. Mr. Yassky has promised to stand up to special interests and has embraced new S.E.C. rules that would block campaign contributors from doing business with the fund. For all of these reasons, we endorse David Yassky for comptroller. 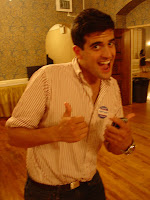 The promises to block contributors from doing business with the city's pension fund is the key sentence here. The Times has been running several articles about the New York State pension corruption scandal and David hit the nail on the head, so to speak, highlighting concerns about corruption on the local level. Liu, in the forums that I have attended, has not been as focused with his message, tackling education and employment issues. There's also the sweatshop gaffe. The Times endorsement will also carry weight among the uptown crowd (East Side and West Side) where David Yassky has been spending more time meeting and greeting constituents (below) than Max Bialystock. That makes Alex Leopold, left, very happy.
Posted by Aaron Short at 12:45 PM

The Times endorses Yassky?
Wow, that paper has totally given up on investigative reporting.
So sad.