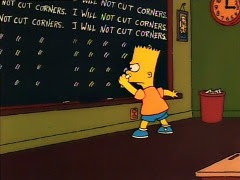 Williamsburg/ Greenpoint- Over the past three weeks, I have been working on a three-part series about the Open Space Alliance, a nonprofit that works closely with the City Parks Department in a public-private partnership, which is at a critical moment. They filed a tax 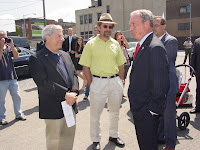 extension for its 2009 financials, because of a sizable increase in revenue from the Pool Parties and other private events. This summer, they are also recruiting community members to join its Community Committee which will serve in an advisory capacity to the OSA Board of Directors. Also, as you may have noticed, the Mayor is running for reelection. The lack of open space on the waterfront coupled with the spread of vacant lots and foreclosed condos is becoming a significant issue in citywide and council campaigns.
The reason I wrote this series was to explore OSA in transition during a 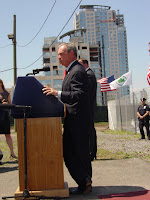 difficult fundraising environment, where the city's revenues are declining, smack in the middle of an election year. Many of the promises that the city made in the 2005 Greenpoint-Williamsburg waterfront rezoning have not been kept and OSA appears to be taking on these responsibilities. OSA is doing this in addition to holding special events like the Pool Parties, and maintaining their existing cadre of North Brooklyn Parks. It's enough to make your head spin. Mine sure did.
Along the way, I made some errors. I regret those, particularly in Part II. The following are links to the three stories from most recent to least, as well as a letter from OSA explaining its accomplishments.
Part III: Mayoral visits raise eyebrows
Part II: Not all in alliance with the OSA
Part I: Open Space Alliance at Crossroads
To the Editor,
We write in response to Aaron Short’s recent article about the Open Space Alliance for North Brooklyn. First, a couple of factual corrections: 1) OSA does indeed have by-laws, which were filed in February 2006, 2) our by-laws and required financial filings are publicly available on the website of the NYS Attorney General, Charities Bureau, and 3) our recent Spring fundraiser, organized by board member volunteers, raised $13,000, not $1,300.
The Board of OSA raises money from public and private sources to improve parks. OSA has a Community Committee that advises the Board about priorities for parks in North Brooklyn. GWAPP, NAG and many other groups participate in the Community Committee, while maintaining their independence and their right to advocate for parks. 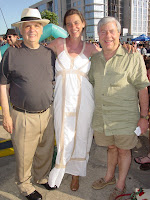 OSA empowers local parks advocates by bringing the Parks Commissioner and the Mayor’s office to meet monthly with local parks advocates on the Steering Group of the Community Committee. OSA and NYC Dept. of Parks & Recreation pay the salary of the North Brooklyn Parks Administrator, Stephanie Thayer, who serves as OSA’s Executive Director (To qualify for city health benefits, 51% is paid by Parks). Prior to Stephanie’s appointment, there was no executive with primary responsibility for overseeing parks in North Brooklyn.
Mr. Short and his anonymous source are entitled to their opinion that OSA has a “mixed” record of success. But we would like to give a more complete list of OSA’s accomplishments, in partnership with Parks, since the formal start of operations and hiring of our Parks Administrator/ED last year.

Since then, more parks improvements were made in CB1 than in many, many years combined. Some highlights include:- Transmitter Park site on Greenpoint Ave.: OSA worked with Parks to open this long locked site to the public for picnicking this summer. Regulatory approvals are being finalized for the site to go into construction next year for full renovation.- Manhattan Ave. Greening and Kayak Launch: OSA worked with several City agencies to open the park last month. It had languished in construction for years.- Northside Pier’s waterfront access: Opened to the public for full -time access, with later than standard operating hours.- Commenced a planning study to relocate the MTA and create additional waterfront parkland.- Lights on McCarren’s kickball/baseball field that have not worked for years were repaired this season. So was the soccer turf.- The area behind the Field House of McCarren was re-sodded and re-greened.- A recycling program was implemented for McCarren in the Fall. Additional garbage pick-up times now take place on weekends in response to community requests.- An analysis of traffic patterns was performed to evaluate the potential of turning Union and other streets into additional parkland within McCarren.- More than 100 trees were planted in McCarren, plus additional trees in the community’s neediest areas, adjacent to NYCHA housing. More trees will be planted in Cooper Park this Fall.- A children’s butterfly garden will be planted in Cooper Park with assistance from PS 132 in the Fall.- The Paul Clinton Memorial Garden was planted in McGolrick.- The long awaited comfort station for Greenpoint Playground is in bid now.- A new dog run will be in construction for Sternberg in the Fall.- New fencing was installed in McGolrick dog run as the dog run group requested, with the aid of funding by State Assemblyman Joseph Lentol. When funding was short, OSA donated more than $3,000.00 to close the gap.- OSA supplements the Parks Department’s basic operating needs for maintenance and other supplies, allowing numerous long-standing community requests to be met.- OSA’s Executive Director and Board lobbied for park improvements throughout CB1. Borough President Marty Markowitz allocated $400,000 to the Parks Dept. for southside’s Rodney Park. OSA will hold planning sessions with the residents of Rodney Houses later this year.- OSA is co-sponsoring programming in underserved district parks that have not had programming, including free theater and movies in Sternberg, free movies in McGolrick, as well as new events such children’s crafts in McCarren, and more.

Mr. Short’s article suggests that the City has benefited more from OSA’s activities than have parks in North Brooklyn. This ignores the fact that $50 million of City funding was allocated to reconstruct the McCarren Park Pool; $26.7 million to acquire land between North 9th-10th Streets for Bushwick Inlet Park; $7.1 million for Phase 1 soccer field in the Bushwick Inlet Park; $22.7 million for the Phase 2 field house, and $16.3 million to acquire land between North 11th-12th on the former site of the Dept. of Sanitation. 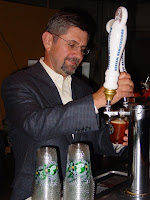 The article implies a possible conflict of interest of our chairman, Steve Hindy, the founder and president of Brooklyn Brewery, whose beer was offered by some promoters at some Pool events last summer. When the Pool was to undergo renovations, and community surveys demonstrated the popularity of the programming, Mr. Hindy, with the OSA ED, worked hard to convince State Parks to partner with OSA to provide an alternative venue for the programming. The beer concession was awarded to highest bidder Anheuser-Busch, the Belgian-owned conglomerate, and The Brooklyn Brewery is not involved in any concerts scheduled this summer.
The programming that OSA has been instrumental in providing is enjoyed by tens of thousands of people. Programming in parks is a fundamental part of a parks conservancy, and raises awareness of our need for more open space. These events are also source of funding for parks in our community. As a result of last year’s summer concerts, OSA has $75,000.00 ready for new projects – the Steering Group of OSA’s Community Committee apportioned some of these funds to fix district plumbing problems, from non-working spray showers in our children’s’ playgrounds, to repairing waterboxes so that we may later plant gardens.

The concert series this summer (in partnership with the New York State Office of Parks, Recreation & Historic Preservation) will raise money for the East River State Park – a park that had its gates locked for several months this year due to lack of funds.We invite your readers to visit our website: www.osanb.org to keep informed about our progress and to contact us with their comments and concerns.

Kudos to you, Aaron, for acknowledging your errors. You have proven yourself overall to be conscientious and sympathetic in the past and I know this was a blip. Keep up the great coverage.

Agreed. Keep up the kick-ass coverage!

I recently came across your blog and have been reading along. I thought I would leave my first comment. I don't know what to say except that I have enjoyed reading. Nice blog. I will keep visiting this blog very often.