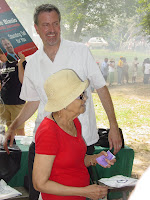 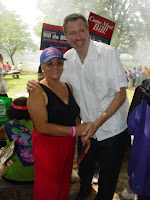 You may have missed this amid the hubbub and hullabaloo of the Kennedy funeral this weekend, but Public Advocate candidate Bill De Blasio keeps rolling. Having jumped over the ballot petition hurdle, De Blasio picked up the Times' endorsement on Sunday, saying he has "the best tempermanent and best record" of the four candidates. He's done well in a crowded field and is gaining on Mark Green in the polls. I still think this race is going runoff, unlike the Comptroller race, but we'll see.
Here's the key paragraph:
Because he has shown that he can work well with Mayor Bloomberg when it makes sense to do so while vehemently and eloquently opposing him when justified, City Councilman Bill de Blasio best fits today’s requirements for the job.
Mr. de Blasio has an impressive political résumé, starting with his time working for David Dinkins and later running Hillary Rodham Clinton’s United States Senate campaign. A City Council member from Brooklyn since 2001 and chairman of the Council’s General Welfare Committee, he has focused on helping many less-fortunate New Yorkers with food stamps, housing and children’s health. He has labored successfully for better schools and an improved quality of life for New Yorkers.

Another potential hurdle for De Blasio is coming on Tuesday, when the Housing Works forum looms, as many AIDS advocates do not like that De Blasio has not come out strongly for HASA (housing for all) legislation.
Posted by Aaron Short at 1:42 PM

wait a second. the comptroller's race is definitely going runoff.