To liven things up this August, I'm doing candidate profiles for The Courier. Here's one featuring Evan Thies More to follow...
33rd District Candidate Profile: Evan Thies
By Aaron Short
Friday, July 31, 2009 11:49 AM EDT
The vacant lots, surrounded by cheap spray-painted plywood and corrugated fencing, are a neighborhood nuisance and an intriguing policy opportunity for one City Council candidate. 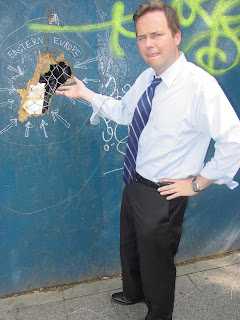 “I live just one block from a very large vacant lot with a huge pond of standing water in it,” said Williamsburg resident Evan Thies, who is running for Council in the 33rd District. “I noticed mosquitoes for the first time ever in my apartment. My wife won’t let me keep the windows open in the apartment anymore and we know the city just had its first West Nile Virus case.”

Thies, 29, has been monitoring open space and sanitation issues in North Brooklyn for much of the past decade, as a senior staff member for current Councilmember David Yassky and as chair of the Community Board 1 Sanitation and Environment Committee. Born in New York, Thies, a Democrat, grew up in New Hampshire where he learned about political activism firsthand from his grandmother, State Health Commissioner Mary Mongan. After graduating from Syracuse University in 2001 and working briefly as a reporter and in Senator Hillary Clinton’s upstate New York office, he took a job with Councilmember David Yassky in 2002.

Thies has worked on securing more funding for renovations to McCarren Park and represented Yassky during the rezoning negotiations. Since he joined CB1, he has been one of the most vocal critics of the Bloomberg administration’s failures to live up to the open space promises made in the rezoning while witnessing the rise of condominium towers scattered throughout his neighborhood.

“When the credit market dried up, it became difficult for small-time developers to leverage capital to develop on lots across Williamsburg,” said Thies. “There’s been a rush in construction on foundations and pile driving in 2007, but there’s been no further development in the following months. Many lots are overgrown with weeds and pools of water. Standing water breeds insects which are an environmental hazard.”

Thies sees these lots as an opportunity to reverse the negative consequences of the housing crash and development following the waterfront rezoning. He has been speaking with a local attorney, Brooklyn Corporation A’s Marty Needelman, about a city statute that allows city agencies to take over properties from private developers that fall into foreclosure and become hazardous to the neighborhood.

“If your property becomes dangerous and/or you don’t pay your taxes for a year, it can be taken away from you,” Thies said. “A lot of these companies are shells, limited liability corporations that are unconnected to major corporations. When a property is foreclosed upon, it stops existing.”

Thies’ idea is to take these properties and convert them into affordable housing and open space. The foreclosed properties are relatively inexpensive and Thies believes it would be tremendously advantageous for the city to acquire these properties, even in difficult budgetary conditions.

“The number-one cost for affordable housing is cost of land. When we can get it as cheap as we can now, we should jump at the opportunity,” said Thies. “I don’t think the owners of these sites really have much influence. They’re not the perpetual players in the real estate environment.”

The idea may have traction in the City Council, too, as Speaker Christine Quinn noted an interest in converting abandoned lots into affordable housing during her State of the City address earlier this year. Local development corporations and nonprofits, including Rich Mazur’s North Brooklyn Development Corporation, Brooklyn Legal Services, and St. Nicholas Neighborhood Preservation Corp., are also looking into the issue, and a recent barrage of articles from New York Magazine and the Daily News has helped raise awareness about the problems associated with foreclosed condos.

Thies has noticed that while he has been on the campaign trail, old residents and new residents have expressed their anxieties about the vacant lots and empty condos in North Brooklyn. While there’s been little violent crime, neighboring precincts have seen rises in nonviolent crime such as drug use, vagrancy, and grand larceny.

“We need to nip this in the bud before it snowballs into a more serious problem,” said Thies. “People have worked too hard to make this community a safe, desirable place to live. Decades of hard work can be undone by a few years of inattention.”
Posted by Aaron Short at 3:02 PM

you quote Isaac Abraham is wrong, what he said was "life is like driving a bike, in order to stay balanced, you got to keep moving"

this is why you are "Short" with facts and information