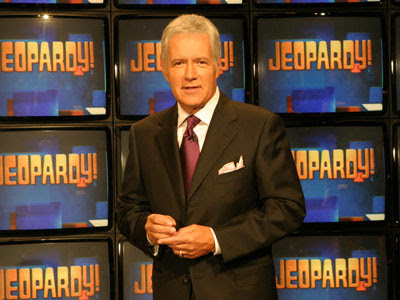 Candidates, remember to state your answers in the form of a question
Williamsburg/ Bushwick- Churches United for Fair Housing wants to have a debate with the three Democratic candidates (Maritza Davila, Gerry Esposito, and Diana Reyna) in the 34th District City Council race. So far, there have been zero. By comparison, the 33rd District will have had ten by the end of the primary. Rob Solano, right, thinks that's unacceptable and has been working hard to organize a debate on August 31st in South Williamsburg. The Greenpoint Gazette, El Diario, and El Puente have signed on as co-sponsors (Blogger note: I may be co-moderating this, but we're still working those details out). 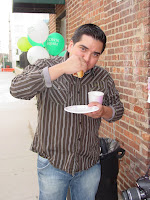 The problem is the candidates are hedging. They're worried because Solano and a few members of his family have given contributions to incumbent Councilmember Diana Reyna back in March. Gerry also didn't like Solano's comments that were made during the Broadway Triangle votes at Community Board 1 earlier this spring and summer.
Here's Solano's response on the contributions:
What I said is I can pull out Ridgewood Bushwick Senior Citizen Council (RBSCC) employees (from the Campaign Finance Board's website), but that doesn't represent an RBSCC endorsement. There's no salary at Churches United for Fair Housing, it's a volunteer organization. There's individuals and organizations. 40 people. Me, Esteban Duran and Juan Ramos, but there's a whole list of churches too. The organization is doing this debate. Churches United for Fair Housing has taken no money (from councilmembers).
According to City Council records, Reyna has not given earmarks to Churches United for Fair Housing this year (page 49) or last. As for the Broadway Triangle comments, Rob said he apologized to Gerry, but that may not be enough in order for this debate to get done. Tracking.
Posted by Aaron Short at 7:00 PM

Ten debates regarding the 33 race? That is ridiculous. Aaron, I am sure your tired of hearing the same shit too. Or maybe not? (pinky to lip edge, Dr. Evil style) Like I commented before, these local races are not won or lost on debates.

Ten debates regarding the 33 race? That is ridiculous. Aaron, I am sure you are tired of hearing the same shit too. Or maybe not? (pinky to lip edge, Dr. Evil style) Like I commented before, these local races are not won or lost on debates.