There's a Stay in the Broadway Triangle 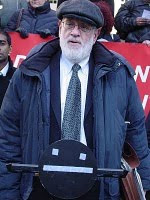 The Broadway Triangle drama is not over yet.
At 5 PM today, a Manhattan Supreme Court justice granted the Broadway Triangle Community Coalition's request for a stay (until a hearing on preliminary injunction in March 2010), and issued a temporary restraining order. About construction on the site, not between Marty Needelman and Vito Lopez or Rabbi David Niederman.

“It is truly sad that until we got to the Court, no governmental agency was willing to overrule the politics of the situation and address the outrageous impropriety of the process and the shocking racially and religiously discriminatory result incorporated into the City’s proposed rezoning and land give away in the Urban Renewal Area,” said Needelman.
More tomorrow.
Correction: I wrote previously that the court granted a preliminary injunction, but the court only granted a stay, which halts the proceedings until a hearing next year where the preliminary injunction request will be taken up.
Posted by Aaron Short at 8:16 PM