It's been a hectic week covering news from an apartment off Wyckoff Avenue (thanks Grace Kelly!) but I've gotten through it despite the fact that my foot has swollen to the size of a grapefruit. I didn't know part of a person's body could turn purple.

Anyway, lots to go over from an unusually busy week and much 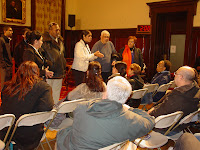 surrounded key votes, decisions, and postponements of big real estate development projects. After three postponements, City Council is set to hear the Broadway Triangle on Monday. The Rose Plaza project received a negative recommendation from CB1 on Tuesday due to affordable housing concerns (and Hasidic infighting). The Nets Arena got a low investment-grade rating from Moodys and Standard and Poor as the Court of Appeals declined to hear a lawsuit from community groups against Atlantic Yards. And Columbia University got the shaft. I guess blight ain't what it used to be.

Transportation news took a hit this week, as those Bedford Avenue bike lanes disappeared without a trace (there's an editorial here), the irreplacable CB1 Transportation Chair Teresa Toro will now have to be replaced, and Park Circle had a "surge of minor accidents". Oh and those romantic water taxi rides that commuters use to get from South Williamsburg to lower Manhattan? Close to going under unless the EDC kicks in some funds. Maybe they should just let Rodney Dangerfield drive it. 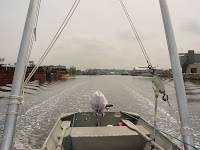 Hey, it's not all boat wrecks and resignations! McCarren Park Pool is having a groundbreaking on Monday at 10:30, and there's also a public information session for Newtown Creek on Tuesday night. City officials have been meeting with community leaders this past week to discuss what they're going to say at that hearing, and we may get an appearance by Cassell F. Holloway IV. Anyway, there may be questions like the ones asked of an Army Corps of Engineers official which the Times rolled through today.

And if you're wondering what to do this weekend, BushwickBK's Anna D'Agrosa has you covered (be sure to check out that Famous Accountants opening Saturday that she helped put together), unless you're already at the Jonathan Lethem marathon reading tonight or the massive, glorious Comics and Graphics festival tomorrow off Metropolitan Avenue. It's not Comic Con, it's a festival, but this could still happen.