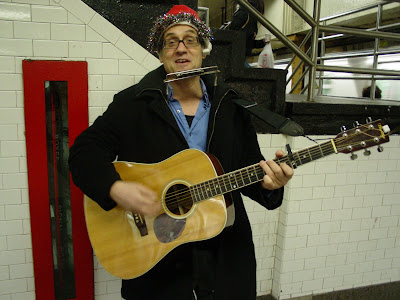 It's Christmastime in Brooklyn. You can almost hear the silver jangles of sleigh bells riding over The Edge and other developments Williamsburg waterfront (Santa doesn't need to spend that much time in empty condos), sprinkling Christmas magic over Greenpoint's Newtown Creek Sewage Plant, delivering a last-minute pep talk to Ridgewood Bushwick helper elves who have been preparing 3,000 meals for North Brooklyn seniors, before hovering over the B38 Bus and and bringing Develop Don't Destroy Brooklyn a shiny, new favorable MGPP decision wrapped in a red Christmas bow. 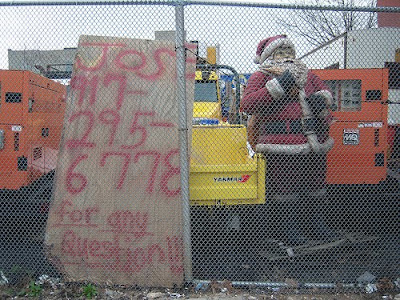 That is, if Santa were actually free to deliver presents to good boys and girls. Sources tell us that Santa is being held hostage by Broadway Triangle Community Coalition members, below, who are demanding a preliminary injunction of their own before Christmas. 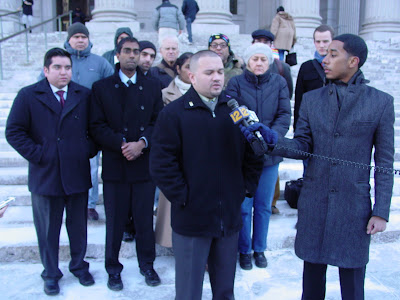 Coalition Chair Juan Ramos, speaking for the group said that the Broadway Triangle rezoning proposal is "nothing more than a cheap political deal having been made at the expense of the bulk of the Latino, Hasidic, and African-American communities of the affected neighborhoods. This rezoning is not an isolated occurrence, but an extension of the City's long history of outrageous racial and religious discrimination in Williamsburg in favor of UJO and its pals." 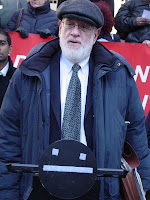 Ramos would not comment on Santa's whereabouts, but many Brooklyn's political leaders are urging for Santa's quick and safe release. Brooklyn Corporation A attorney Marty Needelman has volunteered to temporarily pick up Santa's duties this week after a stay was awarded by Manhattan Supreme Court.

Allright, this joke has gone on long enough. I got carried away there for a bit. Let's just focus on some Christmas decorations and the mayor's visit to Bushwick tomorrow and not talk about a likely trailer park for artists that is coming to Bushwick next year 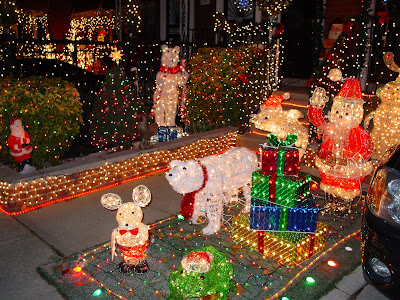 Many are asking where are the best Christmas decorations in North Brooklyn. While Devoe and Conselyea Streets in Williamsburg and areas around McGolrick Park always bring the goods, I'm voting for Evergreen and Cedar Streets in Bushwick for their decorations. This display is from 2007. I can't wait to see what they've got up their sleeve this year.

And finally, while many will be heading to midnight mass or a Matzo Ball Jewish singles party tonight, RBSCC workers are busily preparing thousands of meals for home-bound seniors. Tomorrow Mayor Michael Bloomberg is joining Assemblyman Vito Lopez, State Senator Marty Dilan, Council member elect Steve Levin and other special guests. Also, St. Brigid's Church is roasting a whole pig after mass and holding a five-hour pageant. And you thought nothing is going on here. 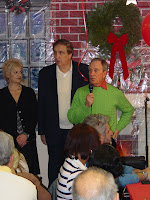 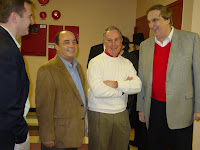 Indeed. Witt holds it down.