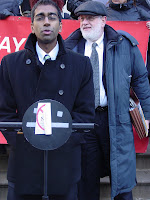 Yes, the Broadway Triangle is moving "Off-Broadway" (thanks Gary Schlesinger), now that Manhattan Supreme Court has awarded plaintiffs a stay in the case. For more information, check the story out.
Before we look at the details, a word about Shekar "Omar" Krishnan, above. Members of the Broadway Triangle Community Coalition have been referring to their plucky Brooklyn Corporation A attorney as "Shake 'n Bake". Sure, they all had a good laugh but coalition members began abusing the term and Krishnan has had enough of it. The dude went to Michigan Law, ya'll. How 'bout some RESPEC? 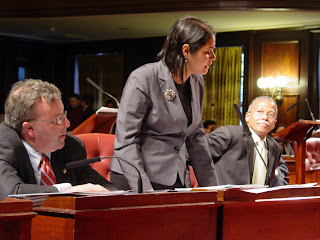 So, I'd like to make a motion to change Shekar's nickname to "Omar" in reflection of his resemblance to Omar Little from The Wire. Council member Reyna seconds. All in favor. Approved. Congratuations. Don't mess with Omar Krishnan. I meant Don't mess with Shekar Little. That sounds better.

What exactly is your occupation Mr. Little?
I rip and run.
Excuse me?
I rob drug dealers.
Posted by Aaron Short at 4:14 PM

Yeah! Finally a little respect for Omar little krishnan! Stay clear cause his shot gun is the broadway triangle lawsuit and he's taking out the men with power one by one!

Aaron,
It's funny, but your blog posts seem less like objective reporting and more like editorializing. Why not just admit that your biased?

I disagree I feel Aaron makes an effort to get both sides of a story. It's not his fault if someone doesn't want to comment on an issue Same happens with el Diario , NY 1 news , daily news even the NY times, they run there stories with the quotes and comments that people give them. And if the other sides doesn't comment that's on them

Both sides of the story? This blog repeatedly presents one side as warm fuzzy and well intentioned, while presenting the other side as it's worst caricature.

For example, this post dealing with the stay doesn't mention that stays are routinely given by judges in these situations, and it doesn't address just how difficult their chances of winning this Court case are going to be, given that the Broadway Triangle Plan went through ULURP, unlike, say, Atlantic Yards.

Aaaron is far from objective, and reading this blog, and many of his stories for the NY Post, not a paper known for being objective or fair to Democratic Leaders, you see it pretty easily.

Wrong about a stay, it's not given out as easily as you say. and saying that the big bk political machine is a good thing is hard to do. That the party boss is a nice guy? Have you not seen the Vito rant? I seen him yell at a NY times reporter for 20 mins. Seriously he's cool with being the man on top and could care less what the press writes he would comment back if he did. Vito believes the press report or blog is a one day thing , it all blows over on the next .When your on top you have to take the hits . He's wrote about the ULURP and how the coalition lost and took the hits , read the post on the winners and non winners of the broadway triangle on the community board level. The point is simple again If you right a story and only one side gives comments and goes on the record the story will play out that way ...