CB1 Live Part II: They're coming for you

Two Brooklynites living in the place where Rose Plaza is supposed to be built.
Jaye Fox is first up:
“They came up a year and a half later with none of them to bear. It shows a clear lack of interest in affordable housing. They need that 20 percent for themselves, it’s not for us, and they’re giving us nothing. It’s a great big difference from Broadway Triangle. They’re asking us to give that guy a bonus for his work for 20 years in exchange for squat. I wish we just voted no."
David Weinstock goes next:
"You say it’s insulting? In order to give 20 percent he has to have 80 percent. I want to put a motion o n the table to disqualify UJO to vote on this. Of the 8 people who voted 5 are on UJO. Mr. Rosenberg, one of the owners of the property was thrown off. They want to deny him, they want to hurt him."
Esteban Duran follows:
I’ve always deferred to Ward’s expertise. Six months ago, we approved a rezoning, in another section of cb1 not on the waterfront. Why is it that we’re voting no to this plan because there is not enough affordable housing when 6 months ago the board wanted more affordable housing?
Weinstock adds more color:
This project will never be approved for political reasons, we should sit with him as long as it takes, work on all the issues and get jobs for this community, get people to work on construction and get people employed. This is what is necessary for this community.
I have never seen this in 20 yrs. It is taking this project and throwing it into the garbage for no reason. Denying a person an ability to build the project. This person is a very professional person. 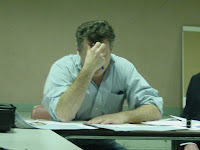 Ward answers: “We should vote on this for land use reasons, not for political reasons.
If you don’t agree with the report, vote no.”

Del Teague adds her two cents:
“I’ve been accused of voting this project down for political reasons. Even if they had 50 percent affordable housing, this is ludicrous. We’re asking 20 percent onsite and allowing them to give additional offsite. It’s very disingenuous to say this ULURP committee voted for political reasons. You can disagree with us, but listen, if it’s true that he would come back with this, he would have. If they want something from us, let them give more to the community. 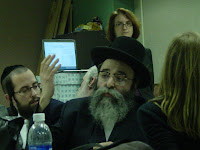 Rabbi David Niederman makes his statement and five young Hasidic guys stand up in the corner and start recording him with their cell phones Rabbi, you have the floor.
This is not the last rezoning to come before us. I don’t live on that street (where Rose Plaza is) but people who do, since they know the previous history of that site, are concerned about their safety.
Please everybody here, we live in the community, we vote for the community.
We are living here, we want our children to live here and not be displaced.
If 90 percent of the units will be outside the community, what is left for those inside the community? This is not going to be built tomorrow. How many rezoning projects, half built projects do we have in CB1? Therefore, let us not think that we have to develop this,
It’s a zoning, we have to vote our conscience and vote our children.

Esteban Duran follows with a rebuttal:
A denial is a message being sent, literally showing the double standard that exists in the community that deals with changing urban renewal areas. We do it all with the sense that it provides affordable housing. I’m not saying it’s a perfect plan but we’re voting to reject it. My question is, how many members in the ULURP committee are affiliated with organizations that were in the Broadway Triangle or in the Rose Garden 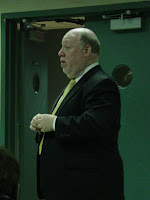 Plaza. In lieu of political accusations being thrown around, it’s important going forward that we have to figure out why they are voting in certain ways and why they are not voting for this one.

8:49 PM: Chairman Chris motions to close debate and move to vote, it gets seconded and there’s a small uproar. Ward takes the mic to clarify the motion amid the squabbling and it gets resolved quickly. The board is voting on the motion for a negative recommendation for the Rose Plaza project.
31 yes-8 no-0 abstentions. Motion passes and the project is voted down.

8:54 PM: I go to interview Howard Weiss in the hallway while Mieszko Kalita takes the floor.
“Liquor licenses to everyone!” says Mieszko. And Gosia Andrzejewicz for everyone!

9:01 PM Julie Lawrence (J-Law) notes an environmental meeting on Tuesday 6 PM Dec 8th at Automotive High School. This follows a meeting between city officials and community board members over the city’s response to the EPA’s recommendation to designate Newtown Creek a Superfund site.

9:03 PM: Outgoing Transportation Chair Teresa Toro gives her final report and it gets a little misty in the room. She mentions an OUTRAGE meeting on Nov 18 regarding waste transfer truck traffic, solid waste management and a letter writing campaign to the mayor before saying goodbye.

“This is my last community board meeting as you know…”
Wait, did the Hasidic guys just make a motion to keep her? SiWi (Simon Weiser) just seconded it. Guys, I don’t think that’s legal.
“Not that I don’t value the work of the board but something had to give. My plate was really full. It has been suggested to me to provide a lower level of service and I think that everyone knows that doing something half-assed is very hard for me to do and if I am one thing it is a whole ass. 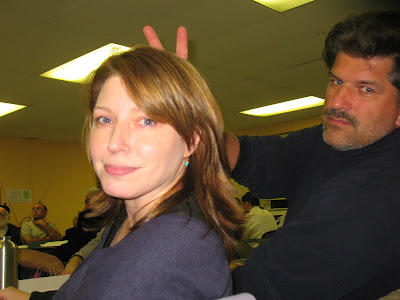 Great reporting. I have a "nagging" hunch about del Toro, as well. She is going to continue as the community superstar she is, and we will be the better for it. A name for the withering Ward gaze?
Wardoned.
Denizoned.
Hinesheimered?

My camera died and Linderman's connection was slow. Besides, Ward looks really ticked off in those Land Use committee photos.

I thought that man in the yellow tie was Alfred Hitchcock.