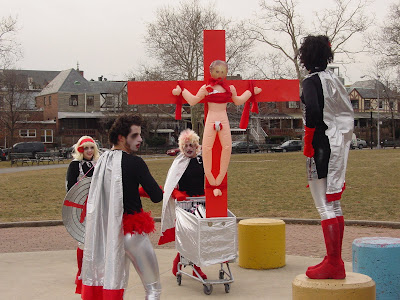 Happy Resurrection Williamsburg!
With Easter and Passover blotting out most news this weekend, A Short Story takes a closer look at a few stories that, like the Resurrection, just keep coming back into the public discourse.

*Senator Kirsten Gillibrand has been repeatedly crucified, by her own party, yet no one is stepping up to run against her. In the Times article Vito throws his hands up. Apparently so did Harold Ford. (That's a touchdown after a fumble for DN's Erin Durkin for those of you keeping track of your fantasy points at home. P.S. Erin, I still like the team name Dunkin' Durkins.) 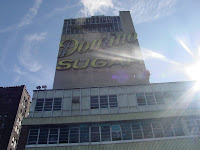 *Speaking of crucifixion, The Daily News nails the New Domino project to the cross this weekend in an editorial exhorting its passage, even though the community board struck down the project by a 2-1 margin. Nevertheless Ward Dennis is carrying more firewood to South 1st Street.

*Hey, didn't you hear? The second coming happened this weekend! Oh wait, I meant the iPad is now available.

*Let's break the Jesus metaphors for a story by Danielle Bengsch in the Brooklyn Ink about a Seder led by the new rabbi Greenpoint Shul Ahavas. Nice podcast Dani!

*Ok, back to more martyrdom. Juliet Linderman asks community leaders like Jan Peterson and Teresa Cianciotta what's up with the Greenpoint Hospital (though I'd like to know what happens if they don't get the project)? while the Aaronites are putting all their chips into the zoning subcommittee hearing for the Rose Plaza development project. And making the ultimate sacrifice this Easter are a group of baby chicks in a Greenpoint liquor store display.

*Though it is probably not a good idea to have a baptism in the waters of Newtown Creek, the pollution inside is so thick, as represented by a photographer that Andy Campbell interviewed (along with Gothamist), you might be able to walk on it in certain sections.

*Finally, you thought the pants on the ground story was dead, but it was too good to absolve completely. Now it has returned, chronicled by The Courier's Tom Tracy, with a big supporting role played by State Senator Eric Adams and Neil Young, of course. Touchdown Jesus!

You missed the El Diario piece on domino, use google translator so you can understand: