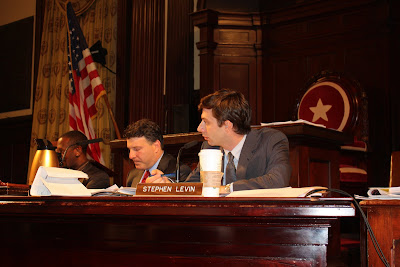 By now, you've read that Rose Plaza got done in a City Hall version of Deal or No Deal (Brooklyn Paper). And it got done Steve Levin's way. Before the Speaker made her mind up, Levin wrung out 30 percent affordable housing, 14 4-bedroom units and 60-3 bedroom units, all of which are affordable too, from the developer, Isack Rosenberg.
He also agreed to remove a waterfront beach from the esplanade plan (though this was done earlier in the negotiations) and a restaurant, ensuring that "yuppies/ hipsters" do not show off their scantily clad bodies in the middle of the Hasidic Quarter.

The story made the headlines around the newsrooms and the blogosphere. Let's link them up!

*Matt Chaban at the Architect's Newspaper has a big breakdown of the final Rose Plaza plan, including more about that beach and the AMI levels in those below market units. Nicely done, Matt.

*Land Use superhero (or supernemesis?) Eliot Brown has a summary from the New York Observer.

*Linda Collins at the Brooklyn Eagle also has a long summary, with more quotes from Rosenberg's rep, Howard Weiss

*Check out Amanda Fung's report at Crains too.

*Finally, Erin Durkin, whose Daily News editorial board has earned the ire of Levin and Lopez over Domino this week, has her report on Rose Plaza.
Posted by Aaron Short at 12:32 PM