A few notes before I drop Steve Levin's testimony. Nearly 90 people signed up to speak, and it 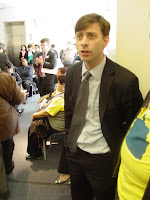 could have been more than that by the time I had to leave. The pro-Domino group vastly outnumbered the project's opponents, and they were all wearing yellow DomiYes! softball t-shirts made by developer CPC Resources.
The whole affair, which may still be going on, started at 10 am and we didn't get to Domino for two hours, which means that everyone was hanging out for the rain delay. Actually it felt like one of those corporate softball games with way too many players on one team, which means you only get one at-bat for the whole game. 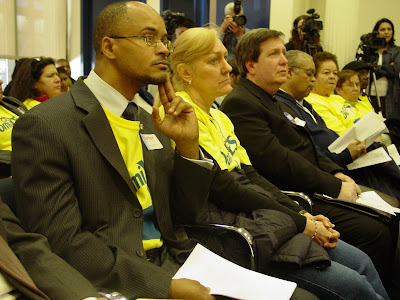 It'll be a while, guys.
GWAPP poster boy Adam Perlmutter was batting 30th, followed by CB1 member Esteban Duran. OUTRAGE's Allison Cordero pinch hit at 71, while CB1 Land Use Chairman Ward Dennis arrived late and found himself batting 84th.
Lots of discussion about FARs, AMIs, density, MTA transit studies, and even hotels (Diana Reyna) and universities (Dennis Farr* Not Congressman Samuel Farr* who I incorrectly named earlier). Check out the link for highlights from yesterday's extra-innings game.
Did I mention that as Levin spoke, CPCR and Church group volunteers (finally) passed out the free lunch? Turkey sandwiches in one box. Cheese in the other. Sadly, no ballpark franks. 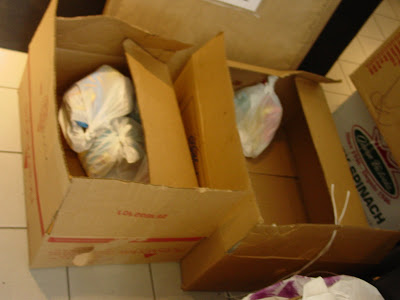