Community Board 1: Beetles and Roses

6:10 PM: What a difference a month makes. Last month, the always present Marie from the Community Board 1 staff was kicking ass and taking names at the door for an overflow crowd. Tonight, there were still seats to be had by 6:38 PM.

Press Row is lonely tonight (it’s just Linderman and me), which is a good indication of the substance of 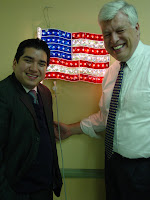 tonight’s meeting. Ward Dennis and Simon Weiser are not here tonight. No sign from the Chairman Emeritus either. But Batman and Robin from the Public Safety Boys are in the hizzzzouse! Holla!

We have our first Young People’s Alert! Of the year. There are an alarming number of under-35 people at the meeting tonight, and they’re not all from Neighbors Allied for Good Growth. Tracking!

I should not that this is a big night for local opera star Richard Mazur, who is giving an update about the Greenpoint-Williamsburg Collaborative Against Tenant Displacement, or GWCATD. 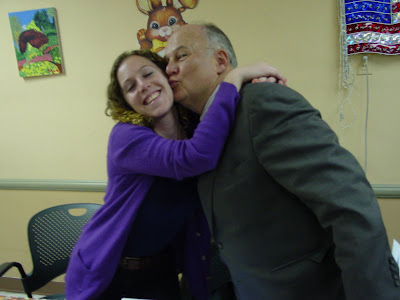 6:41 PM District Manager Gerry Esposito reads the roll and asks for a moment of silence to honor the loss of the Polish President and

6:43 PM: We’re onto the sidewalk cafes. A representative from Enid’s is applying to renew her sidewalk license.

Ashley, the owner: Our neighborhood customers seem to enjoy sitting outside, eating and drinking, looking at our fantastic park, which is in bloom right now.

Rabbi Webber asks what the position is of the neighbors.

Ashley: They’re for it.

Café Argentino is up next, followed by River Barrel. Public Safety Chairman Mieszko Kalita leaves the room to speak with Ashley He is wearing a double-breasted navy blazer and khakis pants, and his hair is particularly vertical tonight. 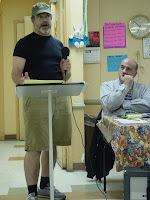 with Wallace from Wallace and Grommit.

"We’re planting in CB1 until 2017 by which at this time you’ll have a million trees. Community Board 1 receives more trees than any area in Brooklyn....

“You will see the signs of your trees coming. You will literally be smothered in trees.”

I feel like I’m at a community board hearing at Hogwarts. Cheerio!

Ian explains that he wasn’t prepared to talk about the Asian Longhorn Beetle but he will anyway and explains how the feds kill beetles by injecting the trees with chemicals.

As he is speaking, CPC Resources’ Susan Pollock and Barbara Baer enter the room, give Rich Mazur a peck on the cheek and take a seat at Press Row. Needless to say, they are in a better mood this month than last month.

Ian continues on about how the beetles are not expected to be eradicated until 2033.

“That’s about it to me. Ten minutes, potted version. Have you any questions?”

There are lots of tree questions, mostly from homeowners who don’t want trees forced upon them. Meanwhile, Gotham Gazette is reporting that as of 4 PM, there is no deal between Councilman Steve Levin and the developers on Rose Plaza. At 8 PM, there is supposed to be a small protest of Orthodox Jews in front of Isack Rosenberg’s home, demonstrating against the “filthy plan” that will attract “yuppies/ hipsters” to South Williamsburg that will eventually build “a beach, G-d forbid!” As if on cue, Levin’s liaison Rami Metal shows up.

Rich thanks Chairman Chris for his involvement and tells us about the collaborative of seven neighborhood groups and their work helping tenants at risk of displacement following the 2005 rezoning.

He’s got a few stats. Homelessness is up 34 percent. There have been 4500 office visits or tenant

“Our experiences since the rezoning have been that luxury and market rate development continue to generate displacement among our neighbors and friends.”

Rich is appealing to the community board to continue to demand funding for the work of the collaborative and then introduces all the tenant organizers who stand up.

The room gives them a warm applause.

7:20 PM CB1 member Simon Weiser shows up. Guess he’s not at the protest.

CB1 member Solomon Bondo stops by Press Row and lets us know that tonight’s Rose Plaza protest has been canceled.

Chairman Chris addresses the negotiations regarding Rose Plaza in his report:

“We’re sticking with 33 percent affordable housing (so far the developer has offered 30 percent). It is interesting to see that when our voice, when put before city planning and the city council carries a certain amount of weight.

“They rated it by proximity to oil spill,” says Jeff Mann, who takes a seat at Press Row.

She is speaking about the resurfacing of the Greenpoint Avenue Bridge, which will occur over the next 12 weeks, and she is referencing a problem with the current bike lane. The committee is asking the DOT to look at making the lane safer. 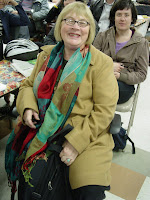 Jeff mentions that the way that the lanes are painted, cars and trucks going over the bridge have no choice but to drive into the lanes, causing backups.

Karen moves on to update traffic calming measures on Maspeth Avenue near Cooper Park and the street reconstruction of Nassau Avenue.

Linderman notices that Jan Peterson, who reenters the room, has completely changed her wardrobe. She’s like the Cher of Community Board 1

I say hi to Ed Towns’ liaison Jonathan Noble and peak outside for a bit. Karen’s report has lasted twenty-two minutes (blogger's note: I was a little harsh in my previous post. Yes, Karen's report was long, but it was her first EVER report and there is a lot going on, particularly in Greenpoint. Snaps for Karen are warranted). The next meeting is on Thursday. 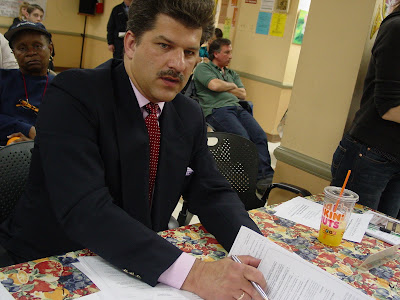 7:54 PM: Mieszko kicks things right off with a list of sidewalk cafes and license renewals as Steve Levin walks into the room.

The list goes on… and on. The committee is mostly recommending approvals for sidewalk cafes, but shortening the length and asking for fewer tables. The vote is approved.

Onto license renewals, including Berry Park’s rooftop bar. This is beginning to drag too. Steve Levin takes a call in the hallway before returns. He still looks like he just finished reading his Torah portion.

The board approves the licenses and Mieszko goes back to his seat. 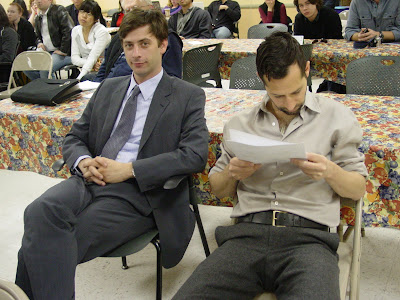 “Rose Plaza is coming up for a vote tomorrow. I have been very active in my support of the community board’s stance on it.

It appears at this point that we have come to an agreement.

The conditions have not been released. I have fought very hard, and a great many of your suggestions have been incorporated.

At least 30 percent affordable. We have been able to reach an agreement.

The goal of the town hall tomorrow on Domino is to foster a lively dialogue.

Steve says that Marty disapproved of the special permit.

Esteban: Why is the Domino meeting being held in the northside tomorrow and not the south side where the project is going to happen?

Esteban is upset about Steve not picking a place on the south side.

With all due respect, it is 12 blocks away and it’s not difficult to get to.

Steve ends his report expressing his grief and sympathy to the Polish people regarding the death of Poland’s President.

*Dennis Stewart and two other librarians from the Brooklyn Public Library kicks things off with budgetary forecasts that could close one library in each council district and layoffs close to 30 percent of the staff. They hope to raise about $500,000 between March 1 and May 31.

*Solomon Bondo visits Press Row with the details of the deal.

3-bedrooms. Doubled it to 60 in total and they are all affordable. The developer will add on 14 4-bedrooms apartments, all affordable, and he will take out the restaurant and a beachfront. He won’t have a beachfront he’s taking it out.

Everything is going to be binding.

As a board member, I feel we’ve accomplished a lot of it. Regarding the affordable housing, it’s not about marginalizing profits, it’s doing what the community board wanted.

*Michael Arcotti, a resident who lives in a condo building near Cooper Park is endorsing the GREC proposal for the redevelopment of the Greenpoint Hospital and says that he is grateful for GREC for cleaning up that neighborhood over the past twenty-five years.

*A resident of a building on N. Eighth Street is thanking People’s Firehouse after a vacate order in the building after the landlord did illegal renovations in the basement. Other tenants are speaking up about this too and some have lived there as long as thirty years.

*A resident on Grand Street is worried about liquor licenses, particularly in the building next door to him.

“This is not Bedford Avenue. Grand Street has a tradition of a strong retail business and also being a family street. Half of them on Grand are not serving food and are just bars.

The other issue is backyard gardens. I know people want to make a living but you cannot sell people’s backyards.

You can come in and make wine in your own caskets.

It’s not on Grand Street. It’s on N. Eighth and Driggs (a former nightclub). And it’s not a cabaret, there’s no dancing, and they won’t be open late like a regular bar.

We’re not a bar, we’re an educational business. We’re here to teach people about the beauties and complexities of winemaking.

*Jan Peterson, Chair of the Greenpoint Renaissance takes the Community Board to task for not sending a letter of support to GREC regarding the Greenpoint Hospital plan. This is more of a polite scolding, or “a hard ask.”

*Cassie Thornton is proposing to start a temporary school to OSA. On Meeker and Vandevoort Streets (Cherry Street Park). Sunday 2-5 PM for a discussion.

“Steve Levin is for the community,” says Simon Weiser before heading out.

*Open Space Alliance’s Stephanie Thayer is inviting community members to its Community Meeting at Warsaw, 261 Driggs Avenue, on April 20, at 6:30 PM while also noting that Modest Mouse will give a benefit concert for OSA this summer.

*A woman on Grand Street tells her story about being harassed by her landlord who wants to renovate the building for a family member, while she is fighting the issue in court.

8:50 PM Chairman Chris ends the public session and we’re close to adjournment. Exciting news. Levin gets his 30 percent and 14 four bedrooms. The Domino people are happy. Karen Nieves rivaled Chairman Chris for time of possession. And Mieszko has a lot of liquor licenses to deal with. Goodnight everyone!

Thanks Arron I feel the love!!!

what about the last motion. from del. about collaborative. and the final esteban outburst re ammending the motion.... did you skip out?

What about the GREC motion that Community Board 1 unanimously voted to send a letter to HPD supporting GREC to get the RFP for the green point hospital site! This is a BFD!

Aaron -- Can you please live-blog the Domino Town Hall tonight?

Making wine in your own casket? I miss all the good stuff.