HPD responds to its own Domino Report 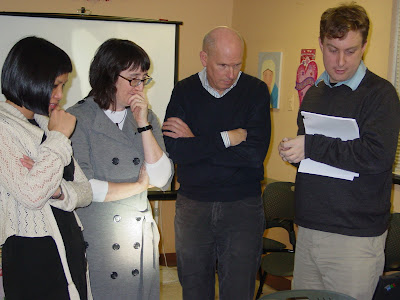 "Does anyone have John Cusack's number? We need that hot tub!

The city is blasting its own 2006 internal analysis for how much profit a developer could rake in if the Domino sugar refinery were transformed into a housing complex.
Both HPD and developers at Community Preservation Resources have called the profit numbers fictitious and the study wildly out of date. An HPD official further explained that it was not connected to the Domino proposal was purely hypothetical based on the market at that time.

“This was a rough analysis done by the City in 2006 strictly to look at the potential impact of preserving the refinery building rather than building another tower on that site. It was based on assumptions that would have been aggressive even at the height of the real estate market and are a complete fiction today. It wasn’t done in conjunction with CPC and was not reflective of their proposal then, much less today" – Holly Leicht, Deputy Commissioner for Development.

CPCR Vice President Susan Pollock chimed in as well, calling the report irrelevant. Here's here quote:
“It’s wrong,” said Susan Pollock, vice president of the development company. “It’s wrong as to construction costs, sales prices, market price, fixed cost, land and pre-development costs, taxes and finance costs.
“There is absolutely no resemblance to the project we are proposing [and the report],” she added.

Yet those are the numbers which are being evaluated at this point, and Land Use Chairman Ward Dennis doesn't think they should be so easily dismissed. Here's his post on 11211.

The thing is that CPCR decided early on that what every other waterfront developer got in 2005 was not good enough for them. They need more - specifically, more market-rate density. A lot more market-rate density. And in order to justify that more, CPCR is saying that their project is different. They have to pay to rebuild the wharf for the waterfront esplanade. They have to pay to preserve the refinery. They have to cross-subsidize the additional affordable units with additional market-rate units. (None of these expenses are necessarily extraordinary or unexpected - every waterfront developer has costs associated with constructing bulkheads, piers and esplanades﻿; CPCR is not the only developer on the waterfront with historic preservation costs﻿; HPD assumes that there will be up to $70 million in housing subsidies available for the waterfront portion of the project. But I digress.)

In order to account for all of these unique factors, CPCR says that it has to have more market-rate units and a series of special permits to allow greater height, reallocation of floor area throughout the site and a huge number of parking spots. All of these permits and extra density come at a cost to the community and the city. Increased market-rate density means accelerated secondary displacement on Williamsburg - Southside and Northside. It means that the amount of available open space per capita drops throughout Williamsburg. It means thousand more people on Williamsburg's buses and subways. It means thousands more cars on Williamsburg's streets.

Speculation regarding how much profit CPCR could bring in has been intense, even in 2007, when Norman Oder weighed in on Atlantic Yards Report:

But with affordable housing, the devil is in the details. Where’s the money coming from? “CPCR's intention is to finance the affordable units using widely available subsidies and incentives,” Pollock stated.
CPC has also said it would build the affordable housing first--another contrast to Atlantic Yards, where the bulk would come later in the project, and could face significant delays.
But the fundamental question, one city regulators have been loath to examine, is this: how much subsidy would be provided for each affordable unit, and how does that compare to other projects? What's the bang for the buck?

and
Whether or not the criticism of Katan is deserved, it’s interesting, at least, that CPCR has allied with Katan. I asked what percentage of the money Katan put up. Pollock responded with a non-answer: “The Katan Group is an equity partner in Refinery LLC. CPCR has sole decision making responsibility.”
Still, it raises an issue: a for-profit subsidiary of a nonprofit, like CPCR, may have lower profit goals than an investor trying to maximize return. So there may be pressure to build more units and build taller to deliver the (unannounced) return the investor needs, even if the decisions are being made by CPCR.
“Community Preservation Corporation doesn’t care about this community,” Eisenberg told the Brooklyn Rail. “I believe they are using their non-profit status to further their for-profit venture.” That's unclear, but the CPC/Katan deal deserves more scrutiny.

So, will we ever see the numbers? Probably not, according to Susan Pollock. It's about as likely as Susan and Holly taking a dip in the Hot Tub Time Machine to 2006 to fix that report.