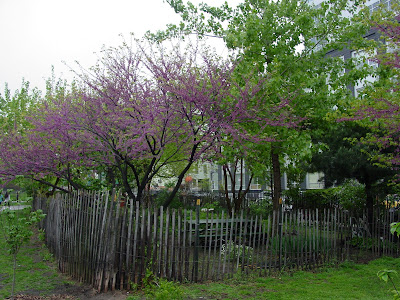 The fence has been up for a week now, but what's next?

GateGate continues at The Brooklyn Paper this morning, where an email sent by a parks official to several community leaders has surfaced explaining why the fence surrounding Nick's Garden was torn down last Saturday to the ire of local gardeners.
The garden's permits lapsed in 2007 and in all likelihood the gardeners will be able to renew their permits with Green Thumb. Yet the root of this story is about the difference between public versus private, and what community means.
A friend of Nick's Garden emailed me with a more detailed explanation before a correction was noted regarding the parks email:

That the Parks Department was merely reclaiming the land for the public when it tore down the section of snow fence at the west end of the garden from citizens that had "privately" cultivated it, is untrue. While I can understand the Parks point of view that community accessibility is an important goal, it needs to be clear that the fence is merely there to protect the ground plantings from careless foot traffic, and illegal activity. Just yesterday morning we were greeted by the vile remains of human excrement complete with toilet paper inside the garden. Unfortunately, this is a common occurrence. The garden has been repeatedly the victim of thefts of plants and tools throughout the years.
Stepahanie Thayer , Administrator for North Brooklyn Parks - NYC Dept. of Parks & Recreation and the Executive Director - Open Space Alliance for North Brooklyn (OSA) statement regarding the situation is disingenuous, at best. Most community gardens, and all GreenThumb gardens are closed off and locked up the majority of the week. A GreenThumb is contractually obligated to be open 10 hours a week, according to their website. Red Gate garden exceeds that by 2-3 times in the growing season.
The Brooklyn Paper article quoted an email from Stephanie Thayer , however it was not addressed to either Walid, Gina or myself; but to other parties perhaps interested in the occurrence of the fence being removed. The first time any one of us garden volunteers read her statement was several days after the fence removing incident, and via a forwarding of that email to me. In fact, even though Ms Thayer has the email addresses and/or phone numbers of the garden volunteers, she nor anyone else, from parks has tried to contact the gardeners directly since the fence was removed.
The only phone communications with the garden and Ms Thayer were limited to the discussion of new plantings to be put in the garden by the Boy Scouts on Saturday April 24, 2010. The offer was graciously declined, because all of the garden's spring plantings were in place and there are numerous trees already in the garden. There was no discussion of opening of the fence. This incident speaks volumes about the Parks department doing what they want to do, when and however they see fit and without input from the community they serve. This, as you know, is a major issue regarding the PLANYC's Million Tree s NYC program.
As for the lapse in Red Gate's registration with GreenThumb NYC, that was an oversight and a miscommunication between the woman that used to register the garden who moved overseas, and the current team of volunteers. We are in the process of correcting the oversight with GreenThumb and look forward to utilizing all of the opportunities and requirements that the affiliation both benefits and obligates us to. I hope that the upside of this unfortunate "misunderstanding" between the garden and McCarren Park administrators is that more people will get involved in the community garden.
Mr Abramson , the Parks Department spokesperson statements are particularly egregious and contradictory to their actions. Removing the fence without any warning only made the garden vulnerable to destruction.
That the fact that it is already a community garden runs counter to his statement that “There must be opportunity for the public to become involved if they wish to be a community garden...They are allowed to garden, but there must be public access to it. That was the goal over the weekend.” I can only interpret that as, let's allow this garden to be trampled down , so that the community can have access to space to become a community garden. That this wholly nonsensical.
Most importantly, for 15 years Red Gate Garden aka Nick's Garden has been open to the local community to enjoy and participate in. To be very clear Red Gate Garden has nothing to do with privatization of public space , and in fact is the opposite. Anyone who has any interaction with the garden knows that it is a public garden that is absolutely open to community input, help, and the garden's enjoyment for anyone that may want to participate.
Posted by Aaron Short at 5:56 PM

the redgate garden is a refreshing take on the standard community garden.it seems a small pc of wilderness in an over developed neighborhood.new blood is pushing out the people who were here before it became chic&pricey.

Still, the snow fencing is really hideous and my understanding is that Parks is going to put in a better fence. The hideous fencing can also be dangerous to children playing nearby.

Meanwhile, too bad all of this angry energy can't be directed toward advocating for more "comfort stations." Every single user of McCarren, be they gardeners or sports players or partiers needs better bathroom facilities.

Having seen a few sides of the argument over the past few days, I truly think it is really a matter of pool communication on everyone's part.