Sweet Dreams are Made of Thies 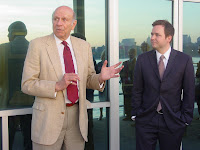 "Wait a minute. Guys, did we forget to call David Yassky?"

City Council candidate Evan Thies threw another fundraiser with Recession All-Star Norm Brodsky, his lovely wife Elaine, and about thirty local residents, Monday night, at CitiStorage (Kent and North 11th Street), which featured spectacular views of the Manhattan Skyline at dusk. The romantic mood kicked up a full notch as a DEP sludge tank slowly ambled by the Manhattan side of the East River. 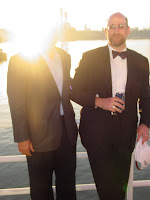 This is the type of event where everybody is looking for something. I've known about this fundraiser for a while, but I still wanted to go to see Thies refine his stump speech and see who else showed up. It was the usual crowd of community leaders like MetroEnergy's Paul Pullo, right, (who spontaneously combusted before the speeches took place), attorney and interfaith leader Adam Perlmutter, the irrepressible Community Board 1 member and historic preservationist Ward Dennis (follow him on twitter!), CB1 member Heather Roslund, documentary filmmaker and CB1 member Dewey Thompson, and rock star mom Jane Pool. Jane had the only breaking news of the night. It involves Conan O'Brien. We can't talk about it. Jane also got in a fistfight with Henry Rollins of, yes, Black Flag, something like twenty years ago. Go ahead, ask him about it. He'll show you the scar. 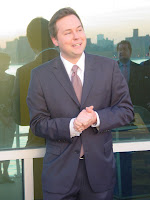 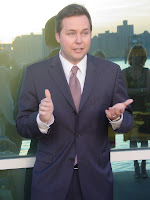 Thies has been holding interviews with Working Families Party members and hopes to receive their endorsement in the coming weeks. He is also looking towards the support of other political clubs in Greenpoint and Williamsburg such as the Seneca Club, Smolenski Democratic Club, and New Kings Democrats, now that CBID endorsed Jo Anne Simon and IND will likely follow suit. Of course, the most important thing is adding more volunteers to the campaign and Thies is moving to do that as well. Most political observers believe it's critical for Thies to gain some momentum in the spring, before Mad Men calls him back for a new season. If you thought season two was intense, wait until season three!

Meanwhile, Jo Anne Simon had this to say about the U.S. Circuit Court of Appeals ruling (aka Ninja v. Pirate) that favored Mayor Michael Bloomberg's move to run for a third term:

“I am disappointed that the courts did not side with the people today, but with politics as usual. For any elected official, it is of the utmost importance to respect the public’s trust and stay true to the will of the people that they represent. I am running for city council so that our communities can have a seat at the table once more and to give them a meaningful voice as to how their government should operate. As a City Councilwoman, I will work tirelessly for a government that our communities can trust and one that will reflect their values and interests.”

OH MY GOD HE DOES LOOK LIKE DUDE FROM MAD MEN.

by the way, I got my forms in the mail and I am now re-registering to vote in BK. Thies better pander to me starting, um, now.