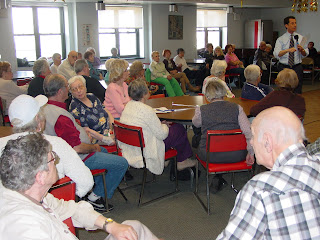 Bubbe 1 to Bubbe 2: "Zuch a nice young man, but can he fix our televion sets?"
One of these days, we're going to have a slow week in the neighborhood. Unfortunately it will be Thanksgiving. Until then, it's time for The Short List!: A look at the week that went by and what is heading our way in the days that follow. This week's Short List is brought to you by Rep. Anthony Weiner's visit to The Council Center for Senior Citizens. See above.

The biggest story this week was not the grand opening of Yankee Stadium (despite what Greenpoint Gazette publisher Jeff Mann says), nor was it Gover 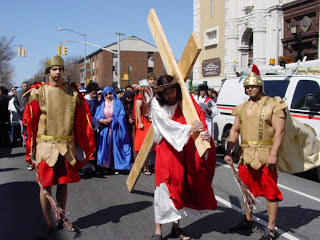 nor Paterson's introduction of a Same Sex marriage bill although it's close, or even the Times cutting it's City Section and threatening to close the Boston Globe (Emily Rooney has the commentary), which is extremely depressing. It was the installation of New York's new Archbishop, Timothy Dolan. The new Archbishop has a lot on his seder plate from same sex marriage, to dwindling church attendance, Catholic school closings, the continuing immigration crisis, the heavy demand on emergency food services, fewer priests in the seminary, and those pesky statue of limitations bills. Hopefully he's looking at the bright side of life.

Back in Brooklyn, an eventful Community Board One meeting witnessed a presentation on adding a cycling lane to the Pulaski Bridge, a downzoning vote, a small fuss about Williamsburg Walks, and... well... people were still a bit woozy from those passover bonfires. It's like I was back at summer camp in the Catskills!

In environmental news, NCMC's Mathy Stanislaus is heading to the EPA soon... probably..., 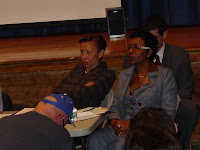 Earth Day is coming to McCarren Park with Town Square Alliance on Sunday from 11 AM to 4 PM, and a highly charged meeting in Carroll Gardens regarding Superfund designation for the Gowanus Canal in which Mayor Bloomberg's staff announced the mayor was opposing the move. Brooklyn Paper ace Mike McLaughlin has a good write up of the debate here. The Times has the developer angle and an updated blog post. Nydia couldn't wait to get out of there fast enough. Hope you're having fun with Barack on Spring Break! 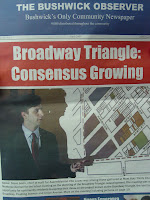 After that, stop by the Mark Bar (1025 Manhattan Avenue) around 8PM for Greenpoint Trivia Night, sponsored by The Greenpoint Library Friends Group. Gazette Publisher Jeff Mann is celebrating his 39th? 58th? 14th? birthday there. We've got some trivia for you. Which candidate has the best silhouette in North Brooklyn? Hint: he's on the right.
Posted by Aaron Short at 3:18 PM