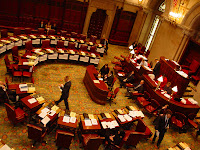 After a grueling day of budget negotiations, codes hearings, and trying to find our way out of the brutalist concrete maze that is Empire Plaza, we’re back in Brooklyn typing away, trying to get a paper out. Well, Juliet is. I’m posting a blog entry. Despite visiting with only a few hours left of the state’s budget deadline (as of this morning, one of nine bills has passed and debate has resumed on the floor) , the Greenpoint Gazette staff managed to wrangle several interviews and even fit in a visit to some local art museums. We didn’t get to Troy, NY or to cast provisional ballots in a local congressional special election, but we did get to experience all that windy Albany had to offer. Jeff Mann wants to come back every weekend. Maybe if they open a restaurant or two for lunch. 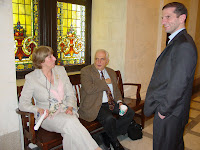 -News about the ShamWow! guy breaking during the budget negotiations
-Free breakfast at the AFSCME buffet in the Empire Plaza convention hall. Union Yes!
-The pharmaceutical reps lobby day after party. Drug cocktails for everyone!
-$800 a month rent for a 2 Bedroom in a brownstone
-Martin Dilan’s Monday night 24 watching parties
-Vito being Vito
-Getting mad bowtie props from a staffer with Senator Pedro Espada
-Cathy Peake’s charming hospitality 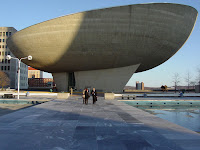 Sen. Ruth Hassell-Thompson, diagnosed with walking pneumonia, was pulled out of the hospital by the leadership.
-Running into George Costanza while trying to find the car in the Empire Plaza parking garage.
-The United Auto Workers lobby day after party.
-The brownstone was in Albany
-Not being invited to Martin Dilan’s Monday night 24 watching parties
-Shelly being Shelly
-“You guys really picked the wrong week to visit here,” –various staffers
-Accidentally preventing Cathy Peake from casting the deciding vote in the 20th Congressional race. Sorry Cathy! (Cathy confirmed on Wednesday that she did make it back in time to vote)
Posted by Aaron Short at 12:22 PM

Aaron, it was a pleasure to meet you and everyone from the Gazette. Thank you for your nice comment. I'm enjoying your blog, but very important, I did get to vote. Only 25 vote difference right now. Wow! Be well. Write on. cathy peake