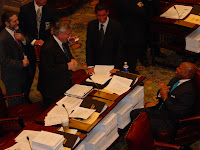 New column at the Greenpoint Gazette about the recent trip to Albany during the budget negotiations.

Also, be sure to check out Juliet Linderman's excellent feature piece on Daniel Squadron running around the Capitol during his first budget.
http://www.greenpointnews.com/news/catching-up-with-senator-squadron

Apr 02, 2009 by Aaron Short At the community board member orientation, held each year in late spring for new members of the city’s volunteer representative bodies, one of the presenters representing the city’s Department of Finance raises a large blue book in the air with the current year printed in gold letters. 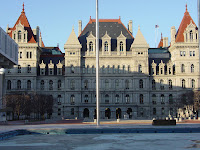 “This is the New York City budget,” the presenter says. “This is the most political document in the entire city.”
What is true in City Hall also applies to Empire Plaza. This week, as the budget deadline expired, state legislators continued to debate provisions in a $131.8 billion budget that attempts to reduce a record $17.7 billion deficit. As of Wednesday night, one bill had passed the State Senate, but the remaining eight bills have not yet come up for a vote.
Read more at: http://www.greenpointnews.com/news/short-takes-albany-dreamin
Posted by Aaron Short at 1:00 PM