Love is in the air? 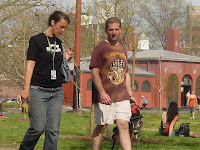 "So we're in agreement, the wedding will take place next Spring, but only if we can get the permits for East River State Park."

Love was indeed in the air in McCarren Park in Greenpoint as residents, hipsters 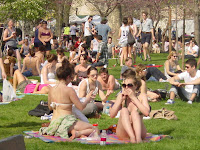 , a local karate youth league, kite-flying kids, hipster residents, softball players, this guy who looked like a young Malcolm Gladwell, and respective community leaders (above), enjoyed summer-like weather all weekend long. Every single square inch of McCarren Park was occupied by sunbathers taking advantage of temperatures in the upper 80s. Meanwhile handmade kites soared in the air above cerulean skies in a scene reminiscent of a Monet painting. 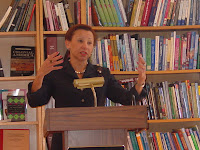 Indoors, Neighbors Allied for Good Growth threw an affordable housing conference keynoted by Congresswoman Nydia Velazquez. The highlight was a film emceed by St. Nicholas' Neighborhood NPC Alison Cordero that showed community activism in Cooper Park, and other Williamsburg and Greenpoint neighborhoods. The other highlight was the spread, which included a plate of donuts from Peter Pan Bakery. Overall, I give the NAG Affordable Housing Conference 3 out of 4 donut plates. 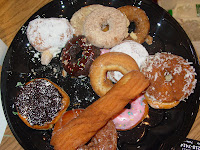 Unfortunately, not everything was sunshine and kisses in Greenpoint this weekend, as two criminals turned the neighborhood into Grand Theft Auto IV, wrecking several vehicles in a hit-and-run. One homicide, possibly two. Khristina Narizhnaya and Juliet Linderman break the story on the Greenpoint Gazette blog (that's greenpointnews.blogspot.com), so check that out as more information becomes known. Thank goodness I didn't go outside to get lunch today. 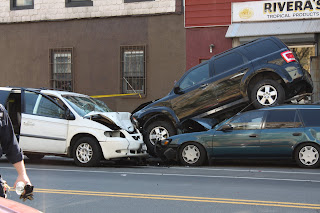 Photo by Khristina Narizhnaya
"Honey, remember I parked on the green sedan!"
Posted by Aaron Short at 6:36 PM

ok, first of all, if you had actually gone to the entire housing forum, you would've known that this was actually the highlight (although alison's narrative was a very close second):

also, what was going on here? you look so serious....

Nice post as for me. I'd like to read something more about that matter.
By the way check the design I've made myself London escort