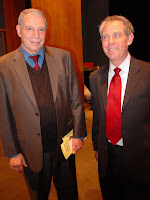 Fascinatingly normal debate tonight in the 33rd District, hosted by Central Brooklyn Independent Democrats and Independent Neighborhood Democrats. To update everyone, there are now seven candidates in the race, as environmental engineer and Brooklyn Heights resident Doug Biviano made his first public appearance in the campaign. The highlight may have been Biviano's adorable children swinging from their mom near the end of the debate or finally meeting Evan Thies' lovely wife for the first time. I embarassed myself in front of both of them. I will not elaborate. At least the Kens (Ken Diamondstone and Ken Baer) were in good spirits. They need a theme song.

(Edited: I forgot. The third highlight was Biviano's near-Yogi Berra collection of one-liners, my favorite of which addressed eminent domain, "You have to set the language, it’s all about the language, I want to be a leader in setting the language." There's also the statement about the community forum led by State Senator Daniel Squadron, "Dan really hit Democracy out of the park with that one." Maybe it's more of a half Yogi.)

Isaac Abraham, the Hasidic Al Sharpton figure in this race, tried desparately to make things interesting, but not even he could succeed in stirring a murmur through the polite crowd. Welcome to the BH, yo! That's how we do it in the BH! Listen politely! Not even a couple of Brooklyn Bridge Park or Atlantic Yards jabs could shake up this soporific crowd.

I'm being too harsh. Diamondstone tried to rustle a few feathers with a short diatribe against the Kings County Machine (which would be a great name for a band), while 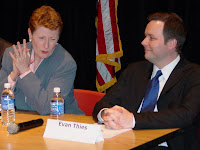 Evan Theis and Jo Anne Simon sharpened their responses and likely solidified support within their camps. An Independent Neighborhood Democrats member, this is Simon's home turf, and she mostly played it safe, shining in questions on educational and reform. Thies, the second youngest in the race, showed an impressive grasp of policy may have gained a few supporters, but he needs to build a volunteer base as friends of Simon, Baer, and Diamondstone handed out flyers at the begining of the debate. The one candidate with the most to gain, Steve Levin, skipped out on this one, attending two events in Park Slope and one in Greenpoint (that would be Gazette Publisher Jeff Mann's 40th birthday). Here's betting the next time one of these events occurs, it'll be a lot more entertaining. Allright. Off to bed.
Posted by Aaron Short at 12:13 AM