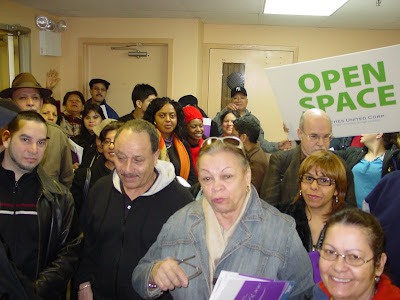 Everyone is getting amped for today's single-elimination development tripleheader featuring the Atlantic Yards (and Freddy's Bar) groundbreaking, the Broadway Triangle lawsuit, and the New Domino Borough President hearing.

Before we begin, let's take you through some important stories of links that you may have missed because you spent the weekend in Puerto Rico watching your friend get married in a monsoon and came back to 200 unanswered emails.

*We'll get to more Domino later today, but taking a step back and framing the project into the bigger picture of the neighborhood's infrastructure are Matt Chaban in The Architect's Newspaper, and Noah Kazis on transportation at Streetsblog. You can also read Lacey Tauber's full comments on quality of life impacts on the NAG blog.

*I wrote about the politics behind Rose Plaza, noting arguments from Isaac Abraham and Steve Levin, so check those out. The project will likely hold until the zoning subcommittee takes up the project in late April. For the only play-by-play of the City Planning decision, read Juliet Linderman's report at the Greenpoint Gazette.

*Architect Robert Scarano sounded off to me in The Courier and The Real Deal to Amy Tennery at the opening of a new Scarano building on 90 North 5th Street. So far, nobody in Williamsburg has complained about that building.

*Free Williamsburg has been all over the bizarre hipster attack on American Apparel's North 6th Street store. Apparently they were a group of Hunter students who were looking to wreck as much property as they could in order to get arrested. They got arrested.

*Senator Dilan is having a busy month with the ongoing MTA negotiations and hearings (including the reduction of the B-13 bus line), hanging out with Governor Paterson, voting no on a bill that could help upstate farmers, and presiding over US Census efforts in the state by holding community workshops seemingly every night for the next couple of weeks. You'll hear more about that later.

*It's all hands on deck at the Brooklyn Paper to cover Brooklyn Bridge Park (yesterday) and Atlantic Yards (today). Meanwhile, there's an editorial on the park yesterday as the question regarding the park's financing and whether the park will be a truly public entity is still unknown.

*Finally, Brooklyn Vegan details that Faith No More has been confirmed for a benefit concert at East River State Park this summer. That came From out of Nowhere.

Just to be clear, that NAG testimony was a group effort, definitely not just me!