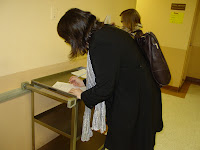 Board One's March meeting, where the vote for New Domino will take up most of tonight's agenda. At 6 PM, forty people came in and started lining up to sign up for public session, including CPCR's Susan Pollock, right. Half an hour later, the number quadrupled. You can't move in here. The NAG girls have taken the front table with the WIMS on stage right and the Churches United table directly behind them. Press Row has moved to the back row and soon there is inexplicably a row behind us. Members of Churches United are sitting and standing to the right, but this isn't all of them. Apparently there's a logjam at the door again, just like at the Broadway Triangle. 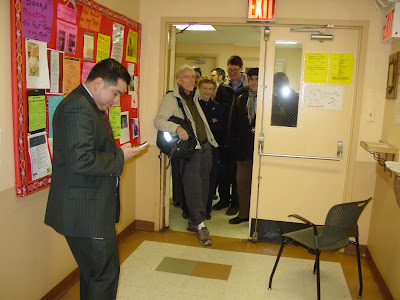 Stephanie Eisenberg stops by and informs me that there's already a post on Curbed about New Domino criticizing several open windows that a resident photographed and we haven't even started the meeting. Think there's some interest from the real estate blogs in this one? 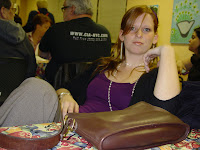 quickly by Erin Durkin at The Daily News. Press Warrior Amy Cleary, Joe Lentol's spokesperson drops by to leave a folder filled with the Assemblyman's position on New Domino. Shockingly, he's against it. His argument basically echoes NAG's concerns about the project's effect on public infrastructure, schools and transportation, and he calls the project too big and too dense for the neighborhood. Cleary mentions that she asked a couple of Churches United parishioners how they felt about the Domino project and they said they didn't know.
As District Manager Gerry Esposito takes attendance and former Courier staffer Greg Hanlon takes a seat at Press Row. He describes himself as a "concerned citizen".
"He's only concerned about The Giants," says Amy. 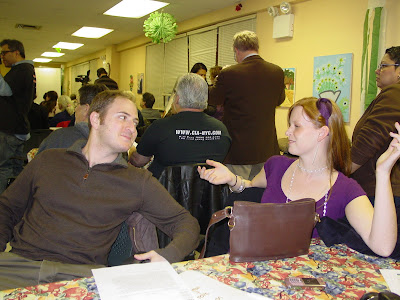 6:36 PM Chairman Chris takes the mic: "Please don't make any noise, especially those of you in the back. Please take your conversations into the hallway."

6:38 PM We're into presentations, and after a quick note about sidewalk cafe applications, Steve Lenard from the City Planning Commission speaks about the city's waterfront plan, the first comprehensive look in over 18 years.
"This community board has done a lot on the waterfront..." said Steve Lenard.
So far Andy Campbell has taken a running list of words that have been used by Steve in his presentation. They are: waterfront, activities, public access, development, revitalization, resource, public space, economic development, jobs, new development, commercial and industrial uses, recreation, cultural, educational, and "the water itself".

Former Reyna staffer Will Florentino enters the room dressed in 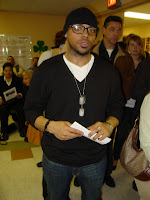 burglar-chic garb. I didn't realize he posted bail in time.
The Greenpoint Gazette's Jeff Mann enters the room and hovers around Press Row. Jeff is no longer engaged to be engaged. He's fully engaged. Hey Jeff, where's your fiance? We want to meet her!
"She's not coming to this," said Jeff Mann.
A lovesick Latin ballad begins playing from somewhere outside.
"This is the theme song of the comprehensive waterfront plan," says Steve Lenard. Well played Steve, Well played.
There's actually live music playing outside. It's a guy with a guitar and there's singing a ballad
New Domino spokesperson Richard Edmonds stops by Press Row to tell us that it is Father Rick's group that is stuck and they can't get in. Also El Puente's Luis Garden Acosta and Los Sures' David Lopez are in the hallway and can't get in either. 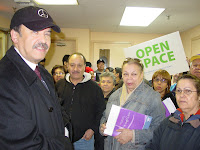 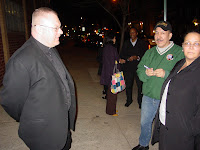 Two things to mention here. First, Steve Lenard's goatee have made him eligible for the Brooklyn Facial Hair All-Stars, taking the place of Mike Hofmann who unfortunately shaved his beard two months ago. Steve's goatee looks like one of those things that fourteen year olds want to grow but don't quite have enough hormones to pull it off. Second, Andy Campbell finally got his penis cast for a story.

Congratulations Steve and Welcome to the 2010 Brooklyn Facial Hair All-Stars!

6:54 Leah Archibald announces that EWVIDCO will be leading a Brownfield Opportunity Area study area program. They're looking at the North Brooklyn Industrial Zone for a possible BOA.
We believe this is high quality jobs for the community." says Leah.
Leah runs through a number of proposed areas for BOA, including 200 Morgan Avenue and the KeySpan Facility and she wants more community input.

7:00 PM: NYC Community Cleanup a presentation about organizing those serving their community service sentences to clean up India Street, which means I'm going outside to photograph Father Rick Beuther. As many people that are in this room are also jammed in the hallway waiting to get in. Inside, the presentation notes that the program could be expanded to clean several parks in Williamsburg and Greenpoint. Their tag line? "If you point it out? We'll clean it up." The group receives a lot of applause.

7:14 PM: Jan Peterson and GREC members take the mic for a presentation about the Greenpoint Hospital site, which is the formal ask of the board for support. 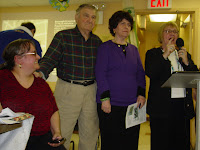 "This may be the longest RFP in the history of New York City... We want to to have support from Community Board 1."
That's 28 years they've been working on this for those of you who keeping track at home. For background, there are four competing bids and HPD is expected to make a decision among them by the end of March, though the city has been languishing on the project to redevelop the former Greenpoint Hospital into affordable housing.
Jan references Domino before explaining elements of the plan, which include a nursing home,
"As you know there are many seniors who live here. I did not think I was going to be a senior fighting here for something I need. I thought I was fighting for something that other people would need, but now, Rabbi Webber, Chairman Chris, are fighting for something that we could move into this..."
The crowd gasps and Jan modifies to exclude the youthful Chairman Chris. Nicely played Jan. Nicely played.
Jan finishes with two points: One is they need the community board to push to make sure the RFP moves and they're asking for support from the community to support their project, as proposed by GREC.
"All of this fits together. We want them to act as quickly here as they want to build on the upscale development on the waterfront."

7:28 PM: The public hearing ends and we have the second roll call while Linderman and I get a 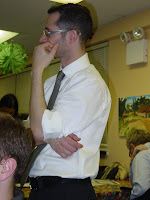 quote from Jan. Meanwhile, Greg Hanlon makes another astute observation, that Rami Metal is slowly morphing into a Mad Men extra. All he is missing is the cigarette. Chairman Chris makes yet another appeal for the chair of the environmental committee before introducing committee reports.
I'm not saying I'm doing anything at the moment" said Chairman Chris.

7:36:12 PM Chairman Chris opens it up to Public Session. Let's go to a list of excerpted quotes from all the speakers for public session: 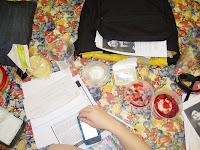 lack of public art in the Domino plan and is proposing the inclusion of more art from local artists. At this point, I should note that the NAG girls are three-quarters through their snacks yet the meeting is only about a third of the way from being finished.
*Phil DePaolo: Phil takes us back to 2005 before catapulting forward to the new New Domino proposal, focusing on the number of affordable units and the effects of the draft Environmental Impact Statement.
*Another resident: "The question becomes density versus affordable."
*Alice Shecter: About sixty years ago, Robert Moses knocked down the building I was born in...The scale and density of the Domino project will dwarf everything around it. Will snuff out the light of thousands of surrouding streets. There does not appear to be demand for this kind of housing in this economy and I am not sure the developers can afford to complete it... Let's hand together as a community, and if not, let us hang separately.
Leah Krieger: I am here in support of the committee's no vote. Manufacturing jobs pay 60 percent more than retail jobs. The jobs program that CPC is proposing is merely retail jobs...
Leah reads a statement and disagrees with
Heather Padin: Many of you will remember that Humboldt
Now I own an affordable unit on Whipple Street. The same corner where I was afraid to pass. I am here because I support CPC. I spent years, years applying for affordable units. I was either ten dollars too short, or over, I was never eligible to pay for these apartments. I now live there. I am a co-op owner, well the bank owns it... Payden finishes and receives applause from stage left.
Press Row is in agreement that Rami looks awesome. Dear Matthew Weiner, can you let Rami know when there is a casting call for season four? You can reach him at 718-875-5200.
*Miguel Hernandez of Churches United reads a statement.I know you heard them outside signing and chanting, we had a few buses out there, the weather was nice but it turned cold. A lot of our supporters are seniors, they grew tired, they were hungry and they went home.
Hernandez reads another letter from the group and a long list of names from residents who did not sign up to speak but are in support of New Domino. 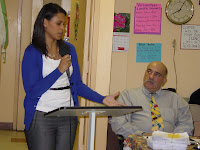 *Another resident, named Ms. Gomez and a group of five residents note the names and voices her support for the project.
*Brandon Cole: "This project will divide this community on racial, economic and finanical lines." Cole references Mike Bloomberg and tries to tie in foreclosures at Peter Cooper Houses and Stuyvesant Town with CPCR and its development projects.
*Another resident, a young lifelong Williamsburg resident voices support for the project.
*Lacey Tauber, secretary of NAG, will speak on their behalf: The project is not sustainable, the 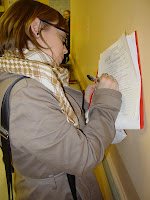 impact on the neighborhood is too great. We are supporting no with modifications. We want to see permanent affordable housing guaranteed and we want to see the anti-harassment zone extended to the entire community. This project is set to change the face of the neighborhood.
Lacey gets cut off and explains that there are other concerns about density, parking spaces, affordable housing.
In the cue are Susan Pollock and Stephanie Eisenberg. Stephanie to Susan: "You go first this time. I'll go after you."
A Cornell University professor he is urging the board to vote yes, for the project that is. "As soon as we can get more housing in place, that's the most important thing."

*Susan: We've hoped that the dialogue will be that, open and honest. There have been all sorts of theatrical antics that are taking over. What these things are doing is obscuring what's going on here.
The most heartfelt concern is that the project is too big. It is a full six blogs on the waterfront. Of course that's big. For all of the claims that is too big, let us review what this project does offer.
Susan goes over the floor plans and square footage of the site but Chairman Chris cuts her off.

Stephanie Eisenberg: I still have my checkbook for $500. Nobody has said that They are only bound to 440 units
There's an old saying, put up or shut up. This is a Wall Street Deal. They haven't talked about guaranteeing a living wage with benefits. I urge you to vote no, it is dense, the rendering is using their photographs. It is astronomically dense. Let's go back to the drawing board and do something with the entire community.
Nancy Wheelan (Wheeler? will check soon): She's raising 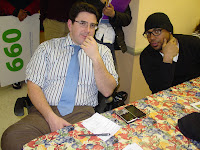 objections to shadow studies, among other things.
Mary Ziegler: She applauds the ideas in general for affordable housing and open space, but not in practice. She is urging the board to vote no with modifications.
Bennett Baruch from Diana Reyna's office takes the mic and says... Baruch hatah adonai notain hatorah... before catching himself and speaking in favor of the project.
"I'd like to conclude that Diana Reyna is in full support of this project."
Posted by Aaron Short at 6:15 PM

Amy Cleary is one ugly bitch inside, and out.