Vito Lopez Profile is Out 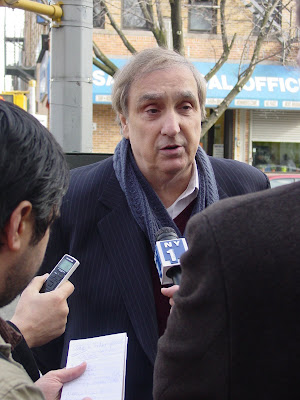 David Freedlander's Vito Lopez profile: The End of County is out this morning in City Hall News. This is Vito Lopez 101 and many of you who read this blog have advanced degrees in Lopezology acquired in one way or another. There are far too many anonymous quotes in the piece which strip the article of some important context, nonetheless, Freedlander gets some good quotes out of Lopez and competently frames the Assemblyman's political role in Brooklyn and how it has changed over time. And the quote you've all heard, David has it too:

Lopez does not like to talk about himself. To him, his work in the community and in elections says enough. Sure, there are questions, enemies. He feels no need to answer them or justify what he does.
You don’t say nothing,” he said. “If someone says your mother is a prostitute, you get mad, and you get mad. Then they say it, and the best thing to do is, if you explain it away people will think maybe she is. So you’ve got to bite your tongue and live with it. What do I do?” His voice started to rise: “I am not corrupt. Please believe me, I am not corrupt. I am not the establishment. I am against it. You have to write about it. But you won’t.”

Then, when City Hall News tried to do a follow up interview, after speaking with Senator Martin Dilan, Lopez abruptly canceled, before saying a few parting words.

“We sat for over two hours,” Lopez said in a brief follow-up interview. “And there were six people here, six independent people here, and they all thought your piece was going to be a hit piece.”
Lopez said that after this article ran, that if it was a positive article then he might agree to another interview sometime down the line. Sometime. Maybe.
“I don’t need this. I have a dozen attorney general candidates coming to see me. We had Ford over lunch, we expected 30 people. Forty-one showed up. Those are facts. Why don’t you write about that?” he said, bellowing into the phone. “I talked to you, and it was like a therapy session. How do I feel about this and that? I don’t need it. Goodbye.”

But before this ended, Freedlander spoke with several sources known as political operatives or Lopez observers to offer their analysis about whether Lopez's power is rising or declining. It would have been interesting to see who said and there's no mention of political analysts familiar with the system with little stake in Brooklyn politics, but after weighing the words of more than forty people contacted, Freedlander concludes that Lopez has a tenuous hold on County and that "some see storm clouds brewing".

But the real reason, many say, that Lopez is safe, is because he matters so little. Kiss the ring, if you have to. Show up at Cono’s when he asks. There is no point in looking for a new county leader. In 2010, county leaders are leaders in title only.

Is this true? Is the ball in the court of "anti-Lopez factions" and Diana Reyna? I am inclined to disagree. Local elections are about turnout and mobilization and few do mobilization better than Lopez. And factions are just that, fractured, until they become mobilized. Freedlander analyzes this point in the forward-looking paragraph of the piece.

Reyna’s win galvanized the anti-Lopez factions in Bushwick. The anti-Vitos are pushing her to challenge him for his Assembly seat, and believe that she could win if she wanted to risk it. A movement to start electing dissident district leaders is gaining steam. There is no consensus choice—for now. But someone who could appeal to the different factions of the county—brownstone Brooklyn, the progressives in his district, the large swaths of central Brooklyn that are bitter over Lopez’s long-running feud with Rep. Ed Towns. The county could crumble, insiders say, if Lopez asks too much of those he helped get into positions of power. People like Sampson and Recchia could decide that they would rather have a county leader take direction then give direction.

So that's what the piece is ultimately about. Vito will be head of County until someone who can mobilize opposition forces effectively can mount a challenge. And what about the vast array of affordable housing units and housing/ senior services that Ridgewood Bushwick and Lopez's office as a constituent advocate to his community? And the Assemblyman's legacy? It's largely absent, but one paragraph in the middle of the story offers a small clue about how Lopez thinks about this.

Many nights, he confides, he drives the streets of Bushwick, looking at each new building he helped bring and thinking about what he calls the “dumps and lots” that were there before. This keeps his spirits up, he said. Surveying his territory and what he has brought to it is his answer to all that gets piled on him, every insult and offense he takes.
Posted by Aaron Short at 12:14 PM

Damn, Vito looks beat up lately. Looks like life is taking a toll on the big guy.

This is a challenging piece to write, and overall David did a very good job with what he was presented. I hope that is clear too.

You can't take seriously an article that claims to have spoken to 40 people yet doesn't name one source. And did he seriously do this article without talking or quoting Councilmembers Levin and Recchia? This piece was just another pathetic Reyna/Simon attack on Lopez. Anyone who doubts the power of county should look at the power consolidated in the Brooklyn delegations, I think that speaks for itself.

I think you're right that the article does a poor job of really getting beyond alot of previous negative articles and blog posts. Like you said, the article seemed like a summary of a r8ny post by Gary Tilsner more than objective journalism.

Those of us in Brooklyn can all guess who the negative sources are, and what I wonder is, how can you claim that the Assemblyman is a paper tiger and then remain anonymous? Seems like if the former were true, the latter would be unnecessary, right?

I think that the proof is in the doing. Since Lopez became the head of the Brooklyn Democratic Party, the role of Brooklyn in New York City and New York State politics has increased. As far as his work on behalf of Bushwick, if anyone ever took the time to compare his record on behalf of his constituents, who are mostly poor and working class, with other legislators, including some of the ones mentioned in the piece (Towns, Reyna, etc.), who always seem to float by without being subjected to any scrutiny, you would see that they are the paper tigers, and that they are the ones that really do a disservice to the community members that elected them.

So, my question to you Aaron is, when will Diana Reyna, who has never passed any significant legislation, who, with all the benefits of incumbency barely won her election, and who arguably does not live in her district, receive the Vito Lopez treatment? When will Ed Towns, who thought it wise to accept special deals from Countrywide Financial Mortgage’s CEO when much of his district was being foreclosed on, receive the Vito Lopez treatment? When will you and your colleagues in the local media actually stop writing the same unfair article over and over again and write something about these other politicians? Many of the anonymous sources have other reasons for remaining anonymous other than “fear of retribution,” they just don’t want to be subject to that level of scrutiny.