I love you, Slimey!
Two teachers from The Urban Assembly New York Harbor School were walking along Newtown Creek yesterday morning, when they noticed what appeared to be a fin (cue Jaws music). The teacher, Ann Fraioli's quote is below:
We were down at Newtown Creek this morning checking out a site for an upcoming Harbor Class cycle. We spotted a dorsal fin in the distance. Sure enough, it was a dolphin making its way up the Creek. We got to see it from about 15 feet away! We tried to get him to turn around, but alas he was headed up the Creek into the muck. Hopefully, he’ll think better of it all and turn around…

Turns out it was a dolphin (cue Free Willy music). Fraioli called 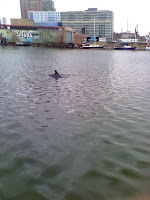 Riverkeeper, who called the Coast Guard, who called Ace Ventura Pet Detective, who finally rescued the animal. Everybody in New York with a marine biology degree is getting quoted about this:
Riverkeeper Boat Operator John Liscomb (The Courier/ Yournabe.com): “It’s heartbreaking to see such a beautiful creature in such terribly polluted water. A few years ago, we saw a whale in the Gowanus Canal. Sadly and typically, when these mammals come into urban inland waterways, it’s because there is an underlying illness and the outcome is not a good one. We hope this dolphin finds its way out."

Ace Ventura: "I found a rare stone at the bottom of Snowflake's tank. It belonged to a 1984 AFC Championship ring. It would have been a Super Bowl ring, but Ray Finkle missed the big kick. Blames the whole thing on Marino. We're talking mental institute escapee. I saw the guy's room. Cozy if you're Hannibal Lecter!"
Riverhead Foundation Executive Director Rob DiGiovanni (Brooklyn Paper): “But we’re not too concerned at this point — from the pictures, it looks to be a common dolphin that’s not distressed. It’s unusual to see it in Newtown Creek, but not odd. It’s a free-ranging animal, so it’s going to move around a lot.”
Dwight Mercer, Free Willy: "When are you gonna get it, huh? When are you gonna get it? Your mother isn't coming back. Forget about the day she dropped you on our doorstep? Forgot about that! Well I remember. She turned around and drove away! Didn't look around, didn't slow down, didn't even look in the rearview mirror! Does that sound like somebody's mama to you? You've got two people here who wanna be your friend. That's more than your mother ever was, and you could use a friend right now, son." 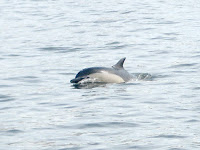 Roy Arezzo, the other Harbor School teacher (New York Daily News) "We were just amazed. We just stood there in awe - shouting, telling it to go back the other way. ... This is a once-in-a-lifetime sighting."
Mrs. Finkle: "It was all that Dan Marino's fault, everyone knows that. If he had held the ball, laces out, like he was supposed to, Ray would never have missed that kick. Dan Marino should die of gonorrhea and rot in hell. Would you like a cookie, son?"
Ace Ventura: "What the... That's it! Einhorn is Finkle! Finkle is Einhorn! Einhorn is a man!... Oh, my GOD! Einhorn is a man!"

Aaron, I almost fell off my chair laughing when I read this article!
I went to the Nature Walk & Manhattan Ave street end park today, looking for Flipper. I even had Mike doing fish sounds from the steps of the Nature Walk. I made him stop though. He looked too much like Mrs. Paul.